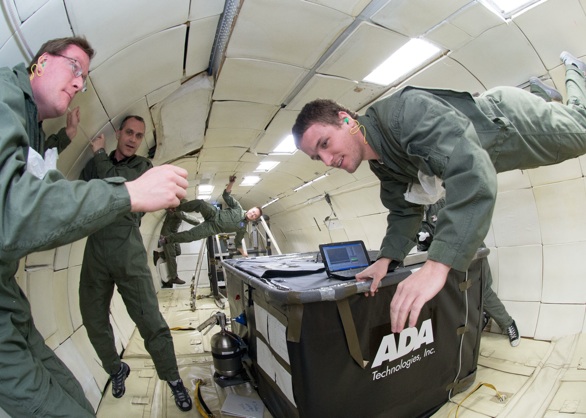 For the past five years ADA Technologies has been developing and refining a portable fire extinguisher (PFE) for use in microgravity environments. This technology uses fine water mist (FWM) to effectively and efficiently extinguish fires that are representative of spacecraft hazards. Fine water mist offers advantages of high heat transfer rates, high heat capacity, and compatibility with crew and shipboard systems that alternative technologies do not. The technology has been tested on a wide range of representative fires including tests in a 34% O2/8 psia environment to confirm its efficacy under spacecraft conditions. However, to date it has not been demonstrated in a microgravity situation to confirm that the design is tolerant of this aspect of orbital flight. Such a test is a logical next step in the evolution of our FWM extinguisher.

The current ADA prototype design meets a specification of less than 10 lb for the filled and fully operational device. Fire suppression is identified in the NASA Technology roadmap Technical Area T06: âHuman Health, Life Support and Habitation Systemsâ. NASA is currently evaluating the use of ADAâs FWM PFE to replace the current CO2 fire extinguisher on the International Space Station (ISS). The three primary objectives of the proposed experiments are to: (1) demonstrate that the water atomization process taking place inside the PFE and the subsequently generated water mist plume are not measurably affected under reduced gravity conditions, (2) demonstrate that water mist droplets transport through a tortuous or greatly obstructed path is more efficient in weightlessness as droplets will not tend to settle, and (3) measure the light obscuration due to a water mist plume dispersing in an open enclosure as this was identified as a potential concern in a manned vehicle.

Two separate experiments using essentially the same setup are proposed. The two experiments would be performed on different days to allow for adjustment of the apparatus and refilling of the prototype extinguishers. In the first experiment, ADAâs PFE FWM will be discharged inside an enclosure across the path a laser beam of a Malvern Spraytec instrument in order to measure droplet size distribution (DSD) upon discharge. ADA has an extensive database of measurements made in the laboratory with th

In the first experiment, ADAâs PFE FWM will be discharged inside an enclosure across the path of a laser beam of a Malvern Spraytec instrument in order to measure droplet size distribution (DSD) upon discharge. ADA has an extensive database of measurements made in the laboratory with the Malvern instrument to which the flight measurements will be compared. In the second experiment baffles will be installed inside the enclosure, spanning most of its length to form a space representative of experiment racks used on the ISS. The prototype PFE will be discharged into this space, and the migration of mist throughout the obstructed volume will be characterized.

The main experiment item will be an enclosure of dimensions: 183 x 122 x 92 cm (72 x 48 x 36 inch). These dimensions are such that a Malvern Spraytec instrument, measuring droplet size distribution, can be installed inside. The width of the enclosure is above 100 cm because the mist discharge needs to first go through the Malvern beam (first 30 cm of the enclosure width) and then disperse for at least 90 cm or about 3 feet to replicate the loss of visibility that may be experienced in an open cabin environment. 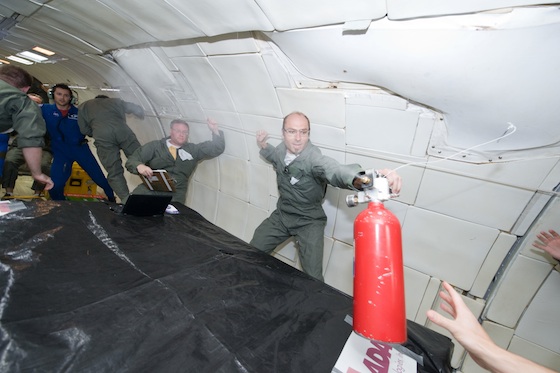