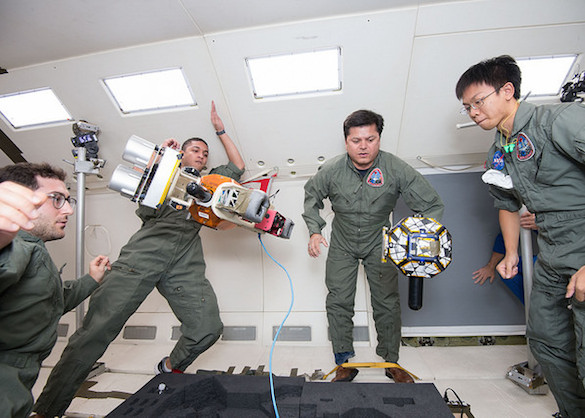 The SPHERES INSPECT (Integrated Navigation Sensor Platform for EVA Control and Testing) program aims to augment the existing three SPHERES satellites on the ISS with additional sensors and actuators to take advantage of the environment within the station to provide risk reduction for a future IVA/EVA system capable of inspection, navigation, and health monitoring. The INSPECT program hardware includes an optical rangefinder, thermographic camera, optical vision system, and control moment gyroscopes (CMGs). These elements are currently being added to the SPHERES facility to demonstrate their individual and integrated functionality via 2D ground testbeds. However, full 6DOF motion and dynamics are needed to refine and implement the control laws and sensor meshing techniques necessary to realize the technologies fully prior to more expensive and risky ISS activities.

Since 2006, the Synchronized Position Hold Engage Reorient Experimental Satellites (SPHERES) have been a mainstay of autonomous, robotic control testing aboard the International Space Station (ISS). The SPHERES satellites operate within the confines of the ISS, relying on the benign, supervised, and pressurized environment to function. Further research into new technologies is required to develop the capabilities required for extravehicular activities (EVA) with a future generation of SPHERES satellites. In particular, new sensors and actuators are required that can operate in the space environment.

To maximize ISS test session productivity and minimize unnecessary use of consumables and crew time aboard ISS, we propose the use of two parabolic flight weeks to conduct preliminary testing of the INSPECT system. Parabolic testing will allow for the characterization of system inertia properties, thruster plume impingement, and control law stability. These campaigns will be highly useful as a means of bridging the ongoing 2D testing with future, long duration microgravity 3D testing.

Additionally, any major control implementation issues can be addressed between flights to maximize the utility of the parabolic campaigns. These solutions can then be applied to the ISS system to prevent similar issues and loss of ISS time. This process has extensive heritage, since both the RINGS (Resonant Inductive Near- field Generation System) and SPHERES satellites themselves underwent the same cycle of ground, parabolic flight, and ISS testing to develop the on-orbit SPHERES facility.