PRIME-4.0:Miniaturized and Reusable Asteroid Regolith Microgravity Experiment for Suborbital and Orbital Use 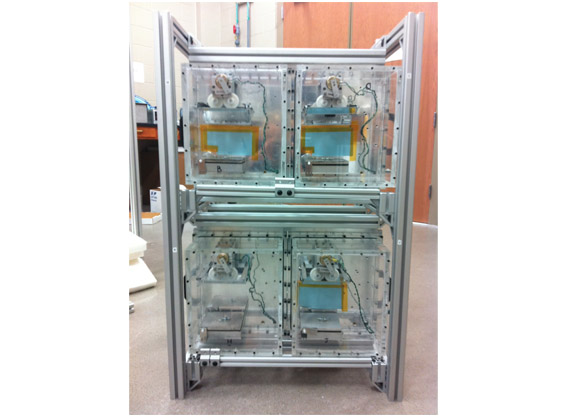 Asteroids are covered with a loose regolith created by micrometeoroid impacts and collisions with other asteroids within the asteroid belt. On most asteroids, including the targets of NASA's unmanned and eventual manned exploration activities, the regolith is very loosely bound by interparticle surface forces and very weak gravity. The behavior of the regolith in this environment is dramatically different than in terrestrial environments. Anchoring equipment to the surface, avoiding dust hazards, collecting samples, and performing other exploration activities on and with the surface require understanding the response of regolith particles to a wide range of disturbances and perturbations in this unusual environment. The Physics of Regolith Impacts in Microgravity Experiment (PRIME) was developed to provide experimental data on the behavior of asteroidal regolith in near-zero-gravity conditions. PRIMEâs main focus has centered on low-velocity collisions in microgravity and has enabled the quantitative analysis of the ejecta mass and velocity produced due to these low-energy impacts.

A vexing problem of experiments with regolith in microgravity is it makes a terrible mess. Following an impact into the surface, for example, any regolith ejected by the impact continues to spread throughout the experiment chamber. This makes it impossible to reuse the experiment chamber until time-consuming and difficult cleaning and resetting has occurred. Thus, with PRIME-3 only 8 experiments could be performed each flight. In addition, the physical scale of PRIME-3 is comparable to a mid-deck locker, making it impractical for multi-use deployment on the space station or in comparable lockers on suborbital launch vehicles.

PRIME-4 will test two new technologies: (1) a new regolith containment system that enables miniaturization of the overall experiment and enables in-flight resetting of the regolith for multiple experiments to be performed on a single regolith sample per flight and (2) a new multi-launcher system that enables multiple impacts, in sequence, to be carried out in a single chamber on a single flight. We will carry forward the technologies successfully tested in PRIME-3.

The new technology can be applied to future experiments to study regolith in microgravity environments on the Space Station or suborbital vehicles.