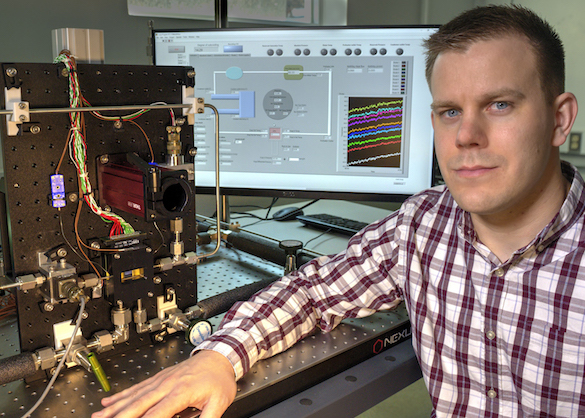 The biggest barrier to widespread use of flow boiling in microchannel coolers is the complex nature of convective boiling and two-phase flow, particularly for microgravity applications for which only limited experimental data is available. To date, two-phase microgap coolers cannot be safely employed for spacecraft thermal management due to the lack of acceptable models and correlations for microgravity operation. The goal of the present effort is to characterize the fundamental fluid physics governing two-phase flows in heated miniature and microscale channels, with special emphasis on methods for minimizing the effect of gravity in such flows.

Read an earlier article in the Goddard Space Flight Center Fall 2015 Issue of CuttingEdge about this work (page 17).

The increasing functionality and miniaturization of modern and emerging electronic devices has exposed the limitations of the current remote cooling paradigm, which relies on conduction and spreading across multiple interfaces to dissipate waste heat. Such approaches are unable to support continued improvements in device performance. Embedded cooling overcomes this limitation by facilitating direct contact between the heat-generating device and coolant flow. Systems that enable the forced coolant flow to undergo phase change within the embedded channels provide additional benefits, such as higher heat transfer coefficients, lower pumping power, and better temperature uniformity.

Experimental validation of gravity-independent behavior would enable spaceflight systems to exploit this powerful thermal management technique and reduce development time and costs through reliance on extensive ground-based testing. Microgap coolers have demonstrated orientation-independent performance. However, varying the evaporator orientation with respect to the gravity vector is not the same as eliminating it, which is why microgravity validation is required.