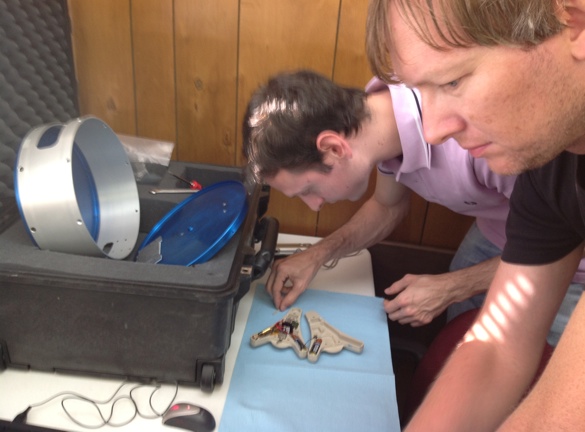 Nanoparticles (size range from a few nanometers up to 1 micrometer) are considered as major building blocks of nanostructured materials. Their unique properties enable new and previously unknown applications. Assessing the exposure to nanoparticles is one important step towards a sustainable nanotechnology. However, particles at nanoscale have also been reported to potentially induce adverse health effects and the need of thorough risk assessment has been identified.
DTM developed a personal sampler called DIAPASON, which has been effectively used to collect nanoparticles of all nature and with uniform deposition. The particles are collected on grids during flight and subsequently analyzed by an electron microscope in order to assess the particle exposure.

A new personal sampler, called DIAPASON, was developed by DTM for nanoparticles exposure studies. DIAPASON collects particles by applying thermophoresis: due to the temperature gradient generated inside the instrument, aerosol particles experience a motion towards the direction of the lower temperature and all the particles within the required size range will be deposited gently on capture grids to be analyzed by an electron microscope.

The range of dimensions of the collected particles goes from a few nanometers up to 1 micron. This range is very meaningful in many fields. Some examples are:
- Combustion verification and tuning of parameters in order to improve its efficiency, for fuel saving and reduction of pollution
- Hostile environment analysis and monitoring
- Last but not least, analysis of atmospheric conditions, prevention of pollution, identification of the contaminants, if any, and their percentage.

In order to complete the studies already performed we need only one application in microgravity. The lack of gravity effect on the nano-powders would allow us to explore other, and for the moment hidden, capabilities of the instrument. In fact on Earth the drop of the largest and heaviest powders due to the âgâ vector reduces the accuracy of the readings, and does not allow completing the analytical studies.

In the frame of the Green-Air program, the immediate application of DIAPASON is to analyze the nanoparticles in the environment inside the International Space Station (ISS). A dedicated version of the instrument has been developed in order to perform 5 runs in different locations of the ISS. These operations are planned to take place in September 2013.

DIAPASON will act as a thermophoretic sampler during sub-orbital flight. The instrument will be able to efficiently collect airborne particles bigger than a few nanometers and smaller than 1 micron. These aerosol particles around DIAPASON will be sucked into the instrument and deposited on a series of TEM grids for their physical and chemical analysis, to be carried out at a later stage based on the DTM protocol. This collection of nanoparticles in microgravity will allow us to complete the DIAPASON characterization, since the reading of this experiment will be affected only by the thermophoretic forces without the gravity acceleration which reduces instrument accuracy.

DIAPASON is a very simple device; its exclusive prerogatives depend only on the thermodynamic phenomena governing the experiment, not on the hardware complexity.

The âcoreâ of the instrument is a couple of metallic flat laminae 20 millimeters long and 6 millimeters wide. Laminae are placed one in front to the other, and the distance between them is 1 millimeter. Thanks to a micropump, the air around DIAPASON (together with the particles) flows through the small channel defined by the two laminae. One lamina is equipped with a small electric resistance in order to keep its temperature about 10 Â°C above ambient temperature and apply thermophoresis forces. The other lamina, where the nanoparticles are trapped, is kept to ambient temperature and is used to support the grids where nanoparticles are captured. Both the electric resistance and the micropump are power supplied by a battery. The other DIAPASON main components are an external switch for power on, a LED for status check and a fuse.