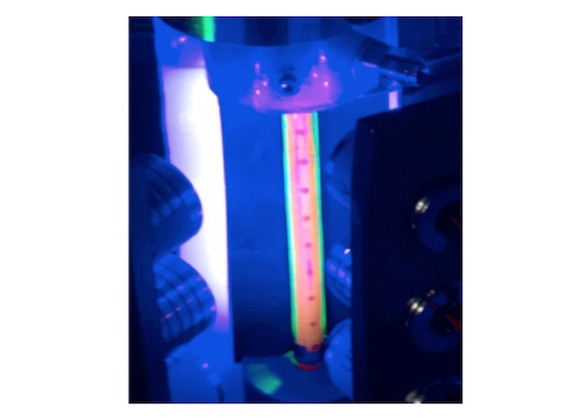 Most existing spacecraft thermal subsystems rely on single-phase heat transfer, but the drive towards lighter, smaller, higher power subsystems to make future missions possible will require use of two-phase thermal systems. The key challenge in developing two-phase thermal systems is the development of a heat transfer database and reliable models for flow boiling in variable gravity environments from which the performance of two-phase heat exchangers in spacecraft can be confidently predicted. We will develop the data and models needed to predict the behavior of two-phase flows in geometries relevant to advanced heat exchangers in variable gravity environments throughout the boiling curve in low-g, 1-g, and high-g (1.6g). Unlike previous work where only time- or space-averaged heat transfer data were measured, we will obtain local measurements of the wall heat transfer coefficient with high temporal and spatial resolution using Temperature Sensitive Paints (TSP).

This work builds on prior work under T0170.

The use of two-phase thermal systems on spacecraft has been greatly hampered by the inability to predict with sufficient confidence their performance at various gravity levels (Earth, Mars, and lunar gravity and low-g). The performance prediction of two-phase systems under these conditions requires a sufficient heat transfer database and reliable models, both of which are not currently available. Although some research in low-gravity adiabatic flows has been performed, very little heat transfer data relevant to advanced space heat exchangers is available and the mechanisms by which heat is removed from the surfaces under varying gravity environments are unclear.

Test conditions include bubbly flow, slug flow, churn flow, annular flow, inverse annular flow, and ultimately dryout. We have performed measurements with infrared thermography in the past, but have recently transitioned to using TSPs since the data interpretation is much easier and the uncertainties are much smaller. Examples of data recently obtained using TSPs are shown along with flow visualization. Current TRL is 4, and it is expected to exit at 4 as well.

At the end of the test campaign, we expect to have completed a preliminary overview of the test matrix for a future ISS experiment.