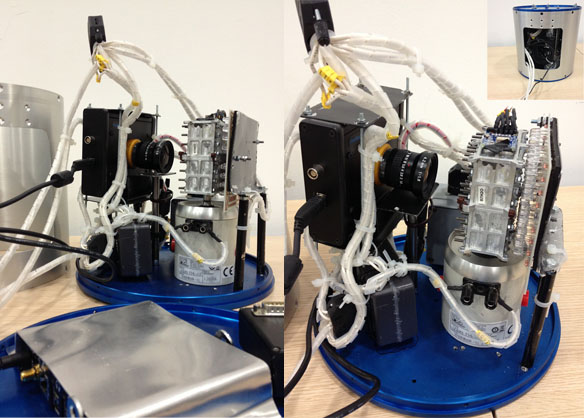 The management of multiphase flows is a key element in many space systems, from fuel tanks to Environmental Control & Life Support Systems (ECLSS). Recent theoretical and experimental works have shown that vibrations play a fundamental role in the behaviour of these flows in microgravity. A system generating the required vibrations for each application can be an efficient technology to manage multiphase flows in space. In this experiment we present a payload for the generation of controlled harmonic translational vibrations in multiphase systems in microgravity conditions. Our aim is to mature this technology by acquiring the necessary knowledge for its use in space applications. In particular, the NASA ISS experiment Nucleate boiling in long-term cryogenic propellant storage in microgravity will benefit of the results obtained during the series of flights in the sRLV.

The effects of controlled harmonic vibrations in some multiphase systems (namely, bubbly flows and granular gases) in weightlessness have been recently studied both analytically and experimentally by different research groups. These works have shown a common feature of the systems consisting of a characteristic pattern selection under certain conditions. The observed pattern consists of the alignment of the dispersed phase in thin layers or screens perpendicular to the vibration direction. This phenomenon constitutes an interesting feature which could become very useful for the management of multiphase flows in space. The most appropriate way to mature the technology towards use in its intended applications is to fly it on sounding rockets or sRLV. On the one hand, the quality of microgravity of these platforms makes them the most adequate choice to test the effects of controlled vibrations. We expect that the microgravity times provided by these platforms will be long enough.

The proposed technology is currently between TRL 3 and close to 4. The flight for which this proposal is submitted is not expected to advance the TRL since its main purpose is to test the integration of the payload with the vehicle at a low gravity environment. In order to advance the TRL, later series of flights with different configurations of the system will have to be performed. We expect after these future flights the technology could be validated for the considered configurations (TRL5).

The proposed technology has potential applications for the management of multiphase systems in different areas. In particular, an important application is found in the storage of cryogenic propellants in microgravity environments, which is a key element to enable long-range exploration missions.

We aim to gather enough information for the characterization of the technology in a broad spectrum of configurations. Specific configurations (type of fluids, volume fractions, test cell geometry, etc) in each flight will allow obtaining valuable information for the use of the technology in each application. In order to understand the behaviour of the fluid flow under controlled vibrations, we need to collect information from tests in different configurations. Image treatment and statistical analyses of the recorded data will be carried out in order to acquire relevant information on issues such as the distribution of bubbles in the cell, dynamics of bubble clusters, reates of coalescence, dynamics of solid particles, etc.

A previous version of the payload has flown in an ESA/DLR Mini Texus type rocket launched in Kiruna (Sweden). The reached altitude was 80 Km, and the flight time was around 10 minutes, including 3 minutes of microgravity. Shown below is an updated configuration for the Flight Opportunities Program. The payload is composed of a test cell, a vibration generator, a data acquisition system, and control and communications systems. Different configurations determined by the type and characteristics of fluids and vibrations can be tested. The current test cell consists of four cylinders containing the fluids. The system is excited at prefixed amplitude and frequency by a shaker controlled automatically. The data acquisition system records videos for post-flight analysis. 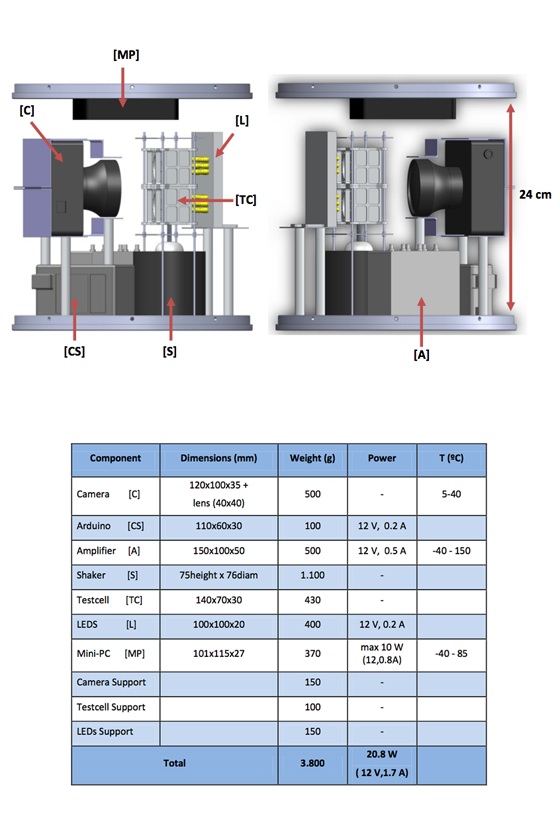