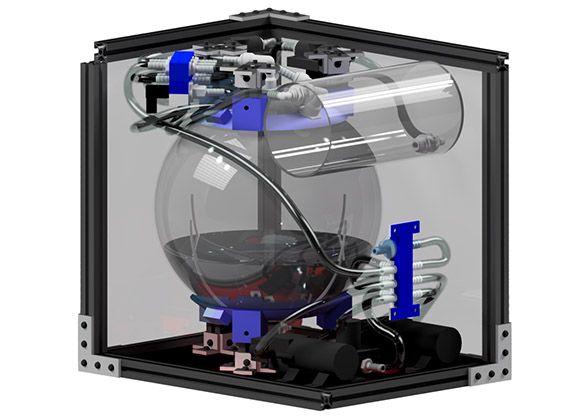 Carthage Collegeâs Propellant Mass Gauging in Gateway Architecture Vehicles experiment includes new spectral density (SDM) and point sensor methods (PSM)âextensions of its modal propellant gauging (MPG) processâthat support fluid mass measurement under varying pressures. These new approaches to propellant gauging do not rely on instantaneous measurement of modal frequencies as a proxy for contained mass. They may be more reliable methods of gauging during high-rate tank drains under acceleration and during propellant transfer, engine burns, and other dynamic mission phases.

NASAâs Space Launch System (SLS) rocket and Orion spacecraft as well as commercial partners have a need for a low-gravity propellant mass gauging concept that provides robust mass measurements during dynamic events that involve changes in tank pressure, such as engine burns. The researchers will use parabolic flights to validate MPG/PSM during continuous drain operations in microgravity, which is expected to provide initial data on the methodâs sensitivity bounds during high-rate drain. A vertical-takeoff and vertical-landing suborbital flight will seek to validate the SDM for 0-g settled gauging, with a goal of demonstrating independence from tank pressure, which affects thin-wall vessels.

The MPG technology is currently at TRL 5, while the SDM and PSM have been validated in 1-g laboratory testing on flight hardware for both Earth-storable and cryogenic propellants. The successful completion of the test program will establish a new low-gravity capability of modal propellant gauging: the ability to meet NASA goals of in-space propellant mass gauging during propellant transfer, engine burns, and other dynamic mission phases in which tank pressure may be changing.