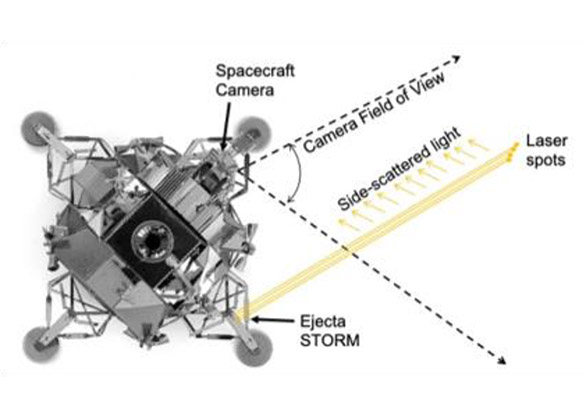 When exploration vehicles land on the Moon, rocket plumes create regolith ejecta and cratering that can be deleterious to the lander and surrounding structures. To understand these effects, researchers must develop empirically based models for soil erosion rate and size distribution of particles resulting from the landing plume. The four-laser Ejecta STORM instrument measures the density and sizes of particles during terrestrial simulations of lunar landings. This research is expected to inform model development, enabling the creation of effective, realistic mitigation plans.

The Ejecta STORM is currently at TRL 4/5 and exists as a breadboard prototype that has been validated in the lab and in a partially relevant environment. The flight program will attempt to demonstrate (1) integration with a lander and (2) operation in flight conditions with simulated lunar plume effects. It is expected to advance to TRL 6 postflight.