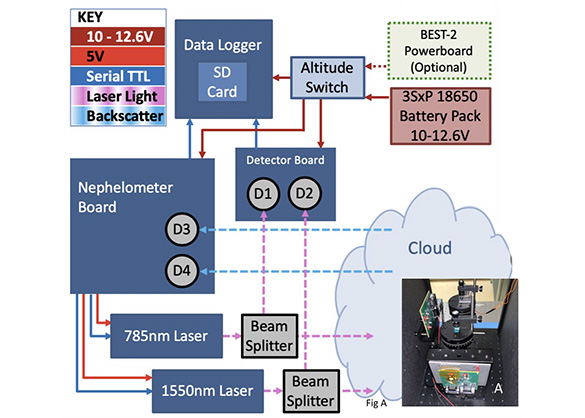 The Nephelometer Experiment (Nephex) characterizes the makeup of planetary clouds. Current cloud measurements, based on satellite imagery or ceilometry, provide low resolution data about the edges of cloud layers. Nephelometry yields microphysical data about particle size, shape, and concentration from a cloudâs interior. Nephex design improves on the Galileo nephelometer with much lower size, weight and power. The smaller form factor allows Nephex to fly on more opportunities in threshold environments and planetary atmospheres.

The in-situ measurements of atmospheric clouds is an identified goal for both the outer solar system gas giants as well as for Mars and Venus. The nephelometer experiment is relevant to planetary exploration, in that it provides a low cost, low volume, low weight, yet high resolution method of characterizing planetary atmospheres. This is especially relevant to New Frontiers missions to the gas giants. It can provide unique data when used as a method of measurement to study the Earthâs atmosphere. The previous nephelometer flew on the 1989 Galileo Probe, also developed at Ames. Improvements in lasers, circuitry, data collection, and power sources have allowed a greatly reduced footprint.

The balloon-ready instrument will consist of two COTS lasers, and an in-house designed circuit board for detecting scattered light and confirming proper laser operation. The balloon flight will prove the hardware operation in planetary atmosphere conditions (i.e. low temperature, partial pressure). The instrument feasibility has been demonstrated in the lab, and is currently TRL 4. Validation by balloon flight will result in a TRL 5 instrument.