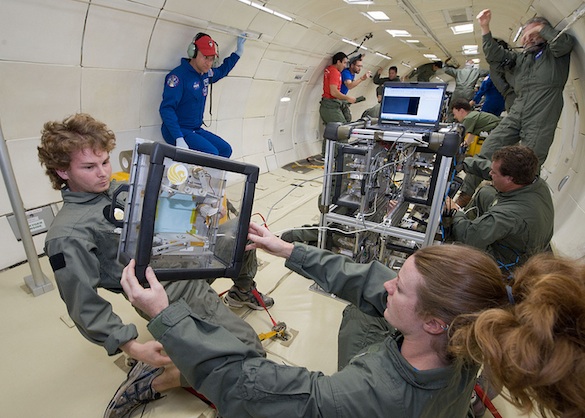 The presence of dust on the surfaces of solar system bodies raises several technical issues related to unmanned and manned exploration of the solar system. Fine grains may damage optical instruments, coat solar panels, or jam moving parts on spacecraft. Particles that enter astronaut habitats can pose a further health hazard through inhalation or contamination of seals or other equipment. Understanding the behavior of fine particles in dusty environments in response to human and robotic activities is crucial to the success of exploration missions to the Moon, Mars, and especially to small bodies such as asteroids with negligible surface gravity. A broad set of experimental data in the reduced-gravity regime in which these collisions occur is necessary to interpret the existing and ever-growing volume of data on dust in planetary systems.

We propose a series of low-energy impact experiments to be carried out in reduced-gravity (lunar and free-fall) on parabolic airplane flights. The experiment is a modified version of the Physics of Regolith Impacts in Microgravity Experiment (PRIME) that was flown previously on parabolic airplane flights. Modifications to the experiment enable higher quality video data as well as free-float of the experiment to obtain lower residual accelerations and will better simulate the space environment of a small asteroid.

Experiments dealing with dust in space environments are likely to be performed on the International Space Station. From a pure technology development standpoint, the proposed test will advance the Technology Readiness Level (TRL) of components of science experiments to be proposed for use on the ISS. The technology described in this document has been extensively tested in a laboratory setting and is ready for analysis in a reduced-gravity environment. The current TRL of PRIME is 6.

The results of this technology test will lead to advances in our understanding of the phenomena of dust dynamics near the surfaces of asteroids and moons with low surface gravity. These objects are the targets of planned NASA missions, including OSIRIS-Rex and potential future human exploration missions.

PRIME consists of 8 independent impact chambers allowing 8 experiments per parabolic flight. Each experiment is an evacuated chamber containing a launcher and a target tray reservoir. The target tray holds a 2-cm-deep sample of simulated planetary regolith (JSC-1 lunar regolith simulant, JSC-Mars-1 Martian regolith simulant, or sieved quartz sand). Impactors are 1 or 2-cm diameter spheres and are launched by a spring launcher mechanism. Different materials are used to adjust the impact energy without adjusting the impact speed. In addition, the acceleration environment can be varied by having the airplane fly at 0-g or partial-g parabolas.

The 8 independent impact chambers are mounted separately in an experiment storage unit (ESU), which is bolted directly to the aircraft floor. Each impact chamber is fixed to the ESU via a steel locking pin which allows for the experiments to operate in two modes: fixed or free-float. While in free-float mode the impact chamber is securely tethered to the ESU. A high-speed high-resolution digital video camera (Mikrotron 1364) is mounted with a view through the top of the impact chamber and aligned with the target such that the target surface is viewed edge-on. The camera records at 80 frames per second with megapixel resolution to an HP Toughbook laptop computer that is secured to the top of the ESU after take-off.