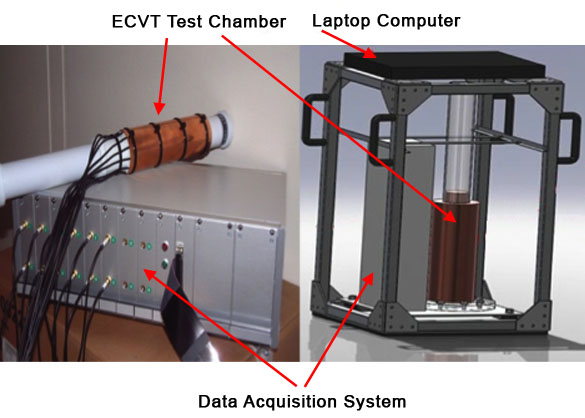 The current state-of-the-art methods of mass gauging of cryogenic liquids in microgravity conditions are based on the global behavior of the storage tank and do not take into account random fuel distribution. Under NASA's IPP program, NASA Goddard Space Flight Center (GSFC) engineers have developed and tested a proximity/near field non-invasive sensor which allows performing reliable and robust mass gauging of fuel stored in a tank subjected to zero/micro-gravity environment. This project intends to use the zero-G environment provided by parabolic flights to test and advance this electrical capacitance volumetric tomography (ECVT) technology to measure mass of propellant fuel stored in a tank operating in a zero-G environment.

Under microgravity conditions, measurements of liquid/fuel contents in a tank becomes problematic because the liquid in the tank is always unsettled, sloshing, not wall bounded, and flowing. The measurement is further complicated because it is highly desired to have the measurement capability that would result in an accuracy in the range of 1-5%. Several promising techniques are currently under development including the pressure-volume-temperature (PVT) method and the optical mass gauge (OMG), which sense the fluid quantity by measuring absorption of light in a tank. A third option is the Radio Frequency (RF) mass gauge that emits a radio frequency signal and measures the electromagnetic resonances of the tank to infer the quantity of propellant. Also, the methods based on the acoustic principle using a Helmholtz resonator are also being proposed to measure fuel mass under zero gravity.

The proposed Electrical Capacitance Volumetric Tomography (ECVT) technology is unique because it images the 3d dielectric profile of the medium inside a tank through measurements of mutual capacitances between capacitive electrodes embedded in the inner surface of a storage tank. The technology readiness level of the ECVT fuel mass gauging is at TRL-4. By flying the ECVT imaging system on the zero-G aircraft, it will be possible to validate its performance under a real zero-G conditions.

Maturing the ECVT technology through zero-G flight opportunities will be an important step in extending its applications to monitor the flow of fluid and gaseous fuel through pipes, tanks and other components used in a propulsion system. Development and successful validation of the ECVT imaging system will enable NASA engineers to study the fluid sloshing and other important science phenomenon (such as science of combustion) under zero gravity space environments.

Before the flight, the sensor tank will be calibrated by measuring mutual capacitances for two types of filling: (1) tank completely empty, (2) tank filled completely with a homogeneous material. After calibration, the sensor's tank (test chamber) will then be loaded with sperical balls (10-20 in number) of different sizes and different dielectric constants. During flight, the sensor measures the mutual capacitances between the electrodes (10 snap shots every second for a sensor with 12 electrodes). The mutual capacitance data will then be post-processed using a robust inversion algorithm called Iterative Nonlinear Tikhonov Algorithm with Constraints (INTAC, developed and tested at NASA GSFC) to estimate locations and sizes of the test sperical balls from each snap shot of measured capacitances. 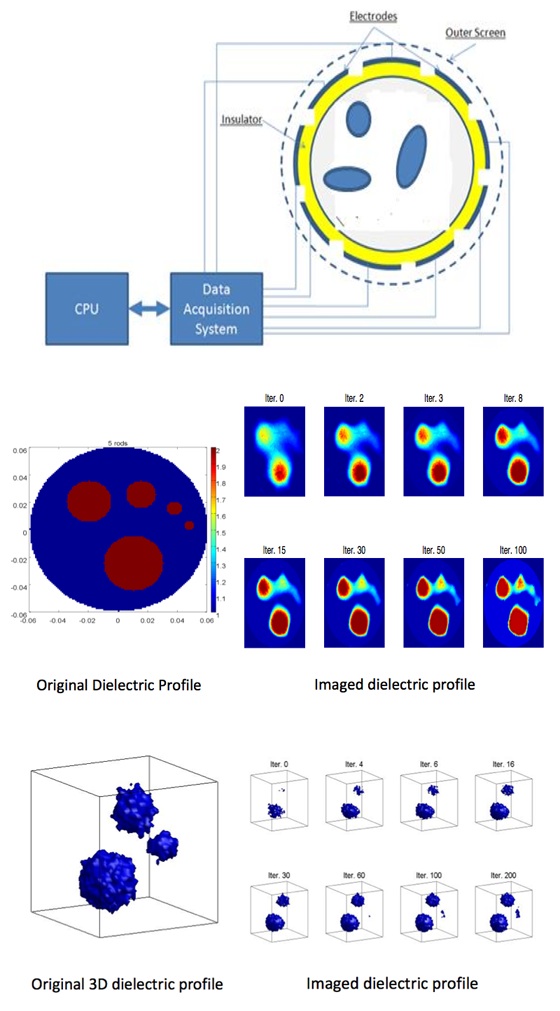