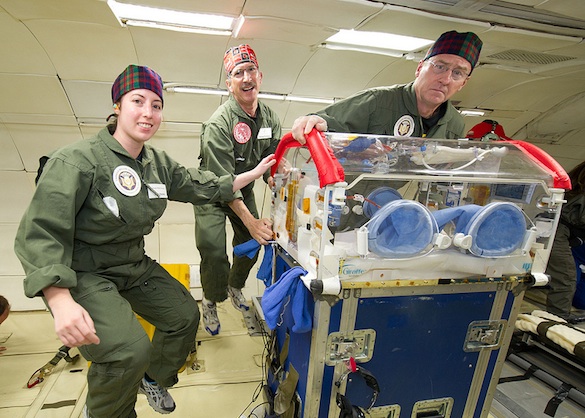 The ability to provide healthcare delivery during expeditionary spaceflight and operations on the surface of the Moon or Mars includes the capability of conducting fundamental surgical procedures. In these microgravity (Î¼-G) or partial gravity working environments, control and containment of the surgical operative site is required to prevent cabin contamination, maintain acceptable visualization of the surgical field, avoid gaseous embolization in the patient, and control bleeding. To address these requirements, a hermetic surgery system (HeSS) is being jointly developed by Dr. George Pantalos (University of Louisville) and his colleagues at Carnegie Mellon University. The HeSS creates a hermetically sealed surgical field that controls and staunches bleeding during surgery by isolating the wound and creating an aqueous environment within the surgical field while leveraging current single incision laparoscopic surgical (SILS) techniques and instruments in clinical use.

The HeSS has progressed to the point in development where initial investigator-tended evaluation of design components and function in the reduced gravity environment of parabolic flight is necessary to identify strengths and weaknesses of the current design and techniques (TRL-4). Using a constrained surgical phantom with simulated blood vessels, surgical tasks to be evaluated include (1) establishing a sealed, aqueous surgical field under the constraining dome, (2) insertion, manipulation, and removal of surgical instruments, (3) control of bleeding in the surgical field, and (4) removal of debris from the surgical field. This evaluation procedure will be repeated during two additional flights with an isolated porcine heart so that control of simulated bleeding can be verified.

The findings from this initial evaluation of the HeSS will result in the necessary design modifications and revision of surgical technique needed to successfully create a HeSS prototype (TRL-7) for further validation and verification in the reduced gravity environments of parabolic and sub-orbital spaceflight. Ultimately, it is anticipated that a flight-qualified version of the HeSS will result that enables the conduct of safe and effective surgical procedures in the reduced gravity.

This experiment addresses NASA work to ensure the health and performance of crews during long-duration space exploration by contributing to healthcare options (surgery) needed for human exploration of space. This project also addresses issues of relevance to the Exploration Medical Capability element of the NASA Human Research Program. Future versions of the proposed aqueous surgery system could potentially be used with a wide variety of ground-based surgical procedures including brain and spina

The hermetic surgical system (HeSS) evaluation station proposed to be flown on the Zero-G parabolic flight aircraft is presented below. The instrumentation chassis upon which the test article will be fastened is an AnvilÂ® Case that is covered with a transparent containment canopy with arm access ports. The developmental models of the HeSS to be evaluated are affixed to the top of the instrumentation chassis with the surgical operators positioned on each side footstrapped to the floor of the aircraft. Equipment to support the experiment are located within the instrumentation chassis with sensor cables and fluid lines passing through feed-throughs up to the Hess test article. Two video cameras will be positioned directly over the HeSS to continuously record the actions of the surgical operators and the response of the HeSS to different tasks in the reduced gravity environment.