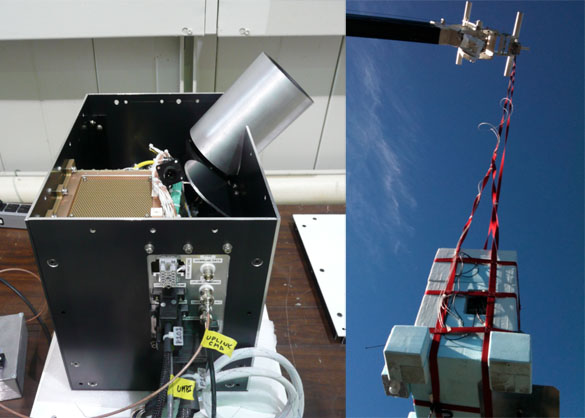 The goal of this project is to test and demonstrate technologies for the stabilization of balloon-borne telescopes. At altitudes near 120,000 ft, NASA's balloon payloads float above 99.5% of the atmosphere, where there is virtually no image degradation due to atmospheric turbulence. In theory, large stratospheric telescopes could provide visible images as sharp as those obtained by the Hubble Space Telescope.

The main obstacle to achieving diffraction-limited performance from a balloon is motion compensation - it's equivalent to having an SUV hanging from a string and keeping it steady at the level of a few arcseconds. The problem consists of two parts: measuring the pointing error (with a star tracker and/or accelerometers, for example) and correcting the pointing error. We have recently flown a star tracker called "DAYSTAR," designed to acquire stars during daytime at 120,000 ft. We now seek to fly a camera based on an orthogonal transfer CCD (OTCCD), a detector from MIT Lincoln Laboratory that can shift charge in left-right-up-down directions. A few ground-based focal planes use OTCCDs to perform tip-tilt compensation of image motion due to atmospheric turbulence. These OTCCD-based systems typically reduce the image widths by about 15%. Our goal is to demonstrate the image quality that OTCCDs can provide using tip-tilt corrections with no moving parts.

OTCCD-based cameras are currently at TRL 4. Our payload, a small telescope with an existing MIT/LL OTCCD camera, will be constructed under a Southwest Research Institute Internal Research program. After thermal-vac testing and ground tests with a simulated star scene generator, the OTCCD camera will have a TRL 6 rating (System/subsystem model or prototyping demonstration in a relevant end-to-end environment). After flight it will also have achieved TRL 9 (Actual system flight proven).

Combined with the means to point at the 0.1" level in day or night and the means to perform image stabilization at the 0.05" level, a robust, no-moving-parts camera will enable balloon-borne telescopes to compete with HST, but at a vastly lower cost.

This project has two eventual goals: demonstration of 0.1" imaging (or better) from balloon- borne telescopes, and demonstration of an OTCCD-based camera that performs image stabiliza- tion at the 0.1" level. The risk associated with the both goals will be retired following a successful flight of a small telescope equipped with an OTCCD-based camera. To date, we know of no OTCCD that has flown on an airborne or spacecraft platform.