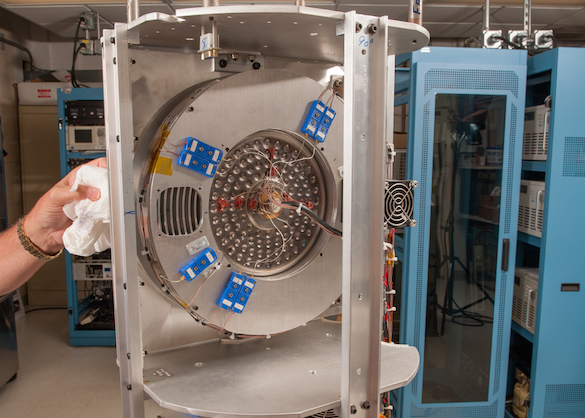 This technology has been infused in Kilopower. Also see this presentation.

The Advanced Stirling Radioisotope Generator (ASRG) was developed to address the fuel consumption of Pu238 as quantities are diminishing. The ASRG is designed to produce approximately 140We using two Advanced Stirling Convertors (ASC) and fueled by two PU238 fueled General Purpose Heat Source (GPHS) modules. Each Advanced Stirling Convertor under nominal operating conditions absorbs approximately 200Wt from one GPHS, converts the input heat into 70We using a linear alternator, and rejects 130Wt to space using the generator housing as a radiator. A conductive ring, commonly referred to as the Cold Side Adapter Flange (CSAF), is used to couple the âcold sideâ of the convertor to the radiator housing. A new method of transferring heat from the convertor to the radiator housing using two-phase heat pipe technology has been developed at the NASA Glenn research Center (GRC).

This technology has been named the Radial Core Heat Spreader (RCHS) and uses a titanium structure and capillary wick with water as the working fluid. Numerous prototypes of the RCHS where fabricated and underwent laboratory and reduced gravity performance testing to address as many of the design requirements as could be affordably tested. The RCHS technology has successfully endured multiple ground and flight tests verifying TRL 6 for fission systems and TRL5 for radioisotope systems.

The RCHS was launched on a Black Brant IX sounding rocket on July 7, 2015. Two identical RCHS units were flown in the experiment section of the rocket with one oriented in the horizontal XY plane and the other in the vertical YZ plane. The units were oriented in this way to test the best and worst case configuration that might be used on future spacecraft. The objective of the experiment was to test the RCHSâs thermal performance throughout launch and into the microgravity environment.