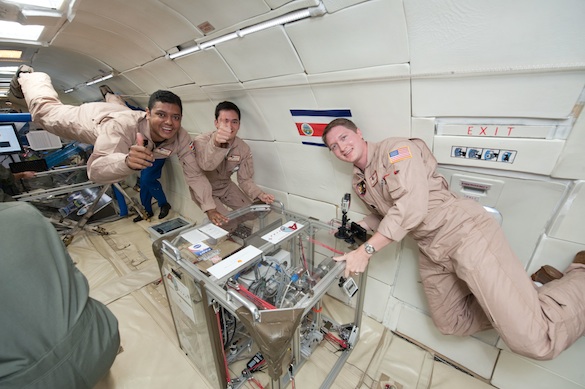 The Variable Specific Impulse Magnetoplasma Rocket (VASIMRÂ®) VF-200 is scheduled to fly onboard the International Space Station (ISS) in 2014. The VF-200 is a high-power, 200 kW, plasma rocket prototype that will be used to demonstrate and validate key VASIMRÂ® technologies and related plasma exhaust plume physics in Low Earth Orbit (LEO), enabling a possible paradigm shift in high power electric propulsion for manned and unmanned spacecraft. The baseline VF-200 design includes a set of High Temperature Superconducting (HTS) magnet assemblies that are conduction-cooled by cryocoolers. These flights will allow for characterization of the cryocoolersâ natural vibrational modes in varying levels of gravity, from 1g in our lab to Lunar 0.16g, to Martian 0.38g, and to near 0g during parabolic flights.

The goal of this project is to characterize the vibrational modes of the cryocooler in varying gravity levels while precisely monitoring the cryocoolerâs power consumption and cooling capacity. The specific and immediate benefit is that through this flight opportunity, Ad Astra will be able to down-select the use of this particular cryocooler and will be able to properly design a vibration mitigation mechanism to dampen transmitted vibration to the HTS magnet and brittle electrical components therein.

Through this series of parabolic flights, we will make significant progress towards TRL 5/6 (from TRL 4), especially in the design of vibration isolation mechanisms that will be required in order to safely interface with the brittle high temperature superconducting electrical leads of the superconducting magnet. In fact, it was during the FAST 2010 parabolic experiment campaign that the vibration issue was identified as a significant problem for interfacing to the brittle electrical leads. Futur

The flight hardware was flown previously on Zero-G Corp.âs aircraft during NASA's FAST 2010 flight opportunities campaign. The flight box, cryocooler, cryocooler vacuum system, power electronics, control electronics, and data acquisition system will be identical. The hardware mentioned will see the addition of a simple preliminary vibration isolation mechanism and solid-state accelerometers in order to fully characterize the vibrational modes of the cryocooler assembly. 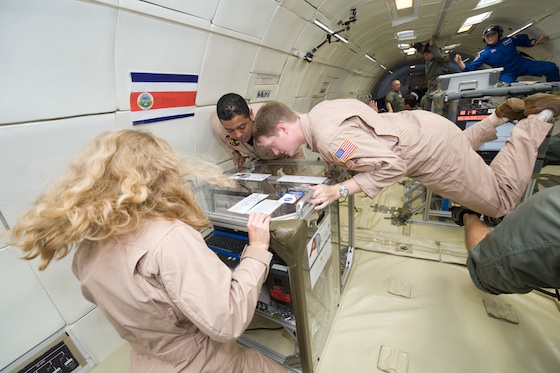 The NASA Flight Opportunities Program and the NASA Microgravity Office allowed our research team to rapidly and efficiently characterize the natural vibrational mode spectrum of a state-of-the-art cryocooler intended for use in the VF-200 engine. During the recent campaign, the flight team evaluated an initial design for mitigating cryocooler vibration in microgravity.

The series of microgravity flights performed to date by the Ad Astra Rocket Company have shown that the SunPower CryoTel line of cryocoolers are a robust technology that is ready to be used in support of the VASIMRÂ® system and other human spaceflight applications, such as cryogenic storage of chemical propellants and radiation shielding for astronauts, among others.