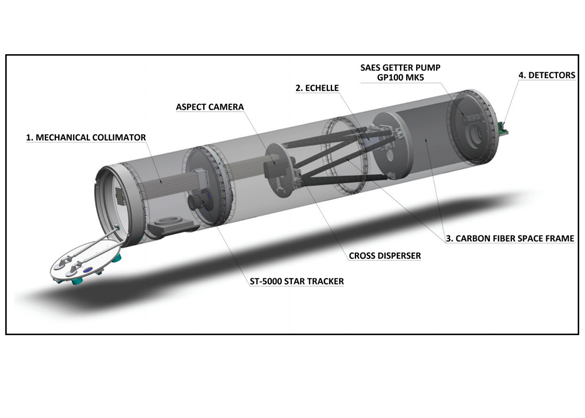 This project lays out a path to take an already functional focal plan array (FPA) design and advance it to a state of flight readiness for inclusion in the CHESS suborbital rocket flight. The Colorado High-resolution Echelle Stellar Spectrograph (CHESS) is a sounding rocket based far ultraviolet (FUV) instrument that will demonstrate several new technologies that will enable future ultraviolet spectroscopic missions. The CHESS payload is prototyping technologies that will increase the capabilities in the far-UV wavelength regime at the same time performing worthwhile science.

Our group has been developing a focal plane array to be flight-tested aboard a rocket-borne spectrograph. The focal plan array design is an innovative approach that solves a series of problems developers are encountering with the use of large format detectors. We will integrate our laboratory prototype into an already-approved and funded rocket payload to raise the TRL of the next generation CCD technology.

The detector has been demonstrated to work in the laboratory environment and so can be assigned a TRL of 4, and the next step is to demonstrate the performance in a relevant environment and to raise the TRL to 6. This will be accomplished by developing a true prototype flight package that will be launched and serve as the primary science detector for a NASA-supported astrophysics mission.