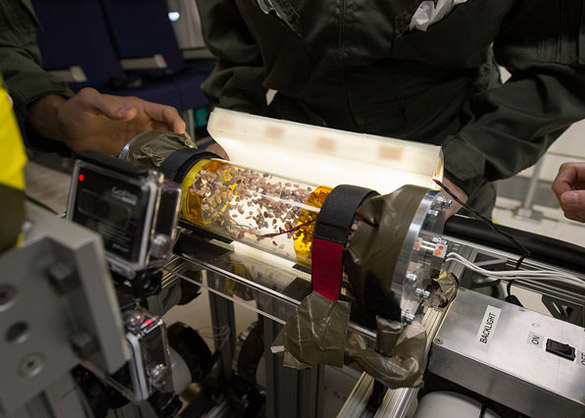 The earliest stages of planet formation involved the accretion of dust into larger and larger objects, eventually forming kilometer-sized planetesimals that grew into planets via their mutual gravitational attraction. The early stages of planetesimal formation require the adhesion of particles through surface contact forces. We propose an experimental study of the sticking of dust particles onto larger objects with a microgravity experiment for parabolic airplane flight.

Macroscopic (cm-scale) target objects will traverse a swarm of dust particles at a low relative velocity (less than 1 m/s) and the amount of dust that adheres to the target object will be measured. The experiment will consist of multiple test cells so that different relative velocities of the dust and target body as well as different dust compositions can be tested. A microgravity environment is needed to test adhesion at the low collision velocities proposed.

Video data will be recorded of the target traversing the dust cloud from multiple angles, and the target object will be captured and isolated after traversing the dust cloud for analysis of the total mass and size distribution of accreted dust after the flight. Our results will help us understand the formation of planetesimals and the evolution of planetary ring-moon systems.