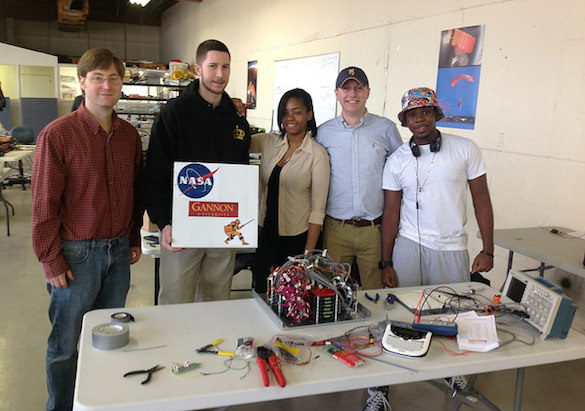 A payload is proposed to detect cosmic rays, high-energy particles of astrophysical origin, in the energy range ~1-100 GeV. An interdisciplinary team of science and engineering undergraduate students at Gannon University, with oversight from two faculty advisors, will complete the payload design, construction, integration, and launch. Energy determination will be facilitated by a six-layer, sampling calorimeter with a thickness of ~12.5 radiation lengths. Primary cosmic rays will interact inside the calorimeter, creating a cascade of secondary particles that will deposit energy in each layer. A charge detector will be employed to distinguish protons from helium nuclei, the two most abundant cosmic rays types. This charge detector will be segmented to minimize charge-measurement contamination from upward-going secondary particles in the calorimeter.

Cosmic rays are high-energy particles of cosmic origin, primarily consisting of completely ionized hydrogen and helium nuclei. A balloon-born detector to study these particles will be constructed by an interdisciplinary team consisting of faculty and students from the sciences and engineering from Gannon University. The Balloon flight will be used to deploy this payload to an altitude of 120,000 ft. During flight, the payload will collect charge and energy data on incident protons and helium nuclei in the energy range from ~1 to 100 GeV with the aim of measuring the proton-to-helium ratio as a function of energy. This information will provide insight into the acceleration and propagation history of cosmic rays. The payload will also be using a relatively new technology called silicon photomultipliers (SiPMs), which convert light into an electric signal, similar to a traditional photomultiplier tube (PMT), but without requiring high voltage.

The payload is TRL 4 (key functions and basic validation). To achieve TRL 7 software needs to be fully developed and the finished payload needs to successfully operate at balloon-float altitudes.

The payload will be carried to an altitude of 120,000 ft for a flight duration of 6 hours via the Near Space Corporation's Small Balloon System. Flight data will be used to measure the proton-to-helium ratio as a function of energy, which provides insight into the acceleration and propagation history of cosmic rays. Additionally, student participants will gain invaluable hands-on experience, applying knowledge from the classroom to a real-life problem. Students will also develop skills in project management, time management, and team work. Finally, providing students with an opportnity to participate in an interesting science and engineering project will encourage them to continue pursuing careers in these fields, which are of crucial importance to both NASA and the nation.