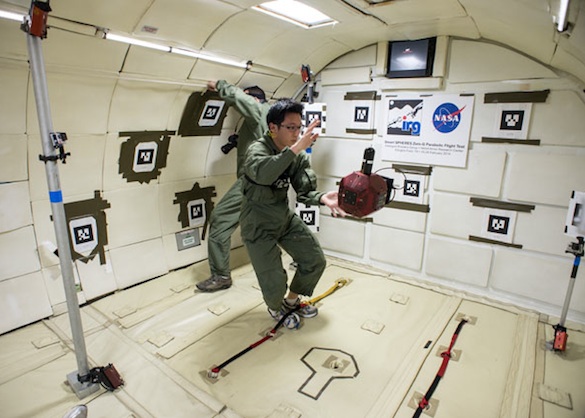 The HET project is advancing technologies required for a remotely operated robotic free flyer on the International Space Station (ISS). ISS testing with the Smartphone on SPHERES allows the technology to be tested in a prototype system in a high fidelity, relevant environment. Current testing is focused on vision based navigation that will allow a free flyer to navigate anywhere within the ISS. Prior to the parabolic flight, the Smartphone vision based navigation had only performed in 1g. The parabolic flight tests have allowed the technology to be tested in a medium fidelity, relevant environment. Though the parabolic flight tests are performed in 0g, the parabolas donât last as long as the robotic tasks would, and therefore cannot test long-term drift in the localization.

This flight campaign tested three different configurations of the HET Smartphone (a modified Google Project Tango). The first configuration used the smartphone only to conduct 3-D mapping of the test environment. This was performed in both 0g and 1g for comparison. The 0g measurements were collected over six parabolas. Each parabola was used to collect one plane of the operating environment; ceiling, deck, forward, aft, starboard and port. The next two configurations both used the Smartphone connected to the Synchronized Position Hold Engage Reorient Experimental Satellite (SPHERES) free flyer. Free flyer flight was measured with the Smartphone sensors, but the motion was also recorded using the SPHERES positioning beacons for comparison. The second configuration used the Smartphone sensors to characterize thruster performance. The various SPHERES thrusters were fired while the Smartphone measured movement of the free flyer. For each parabola, the SPHERES would only fire thrusters along one axis, and each axis was measured over several parabolas. This was repeated for +/- x, y and z axis. The third configuration used the Smartphone to command movement of the SPHERES, then the Smartphone would measure and monitor SPHERES movement. Plans (which script translation paths between waypoints) were selected and run from the Smartphone interface. Each plan was designed to complete within one parabola, and each plan was run multiple times.