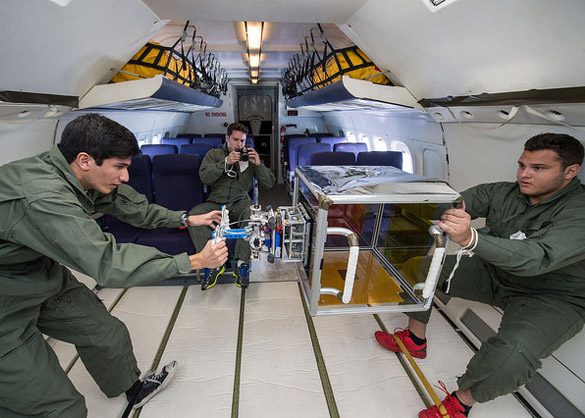 JPL has developed a tool for grappling non-cooperative objects in microgravity using switchable adhesives that are inspired by the gecko lizard. Using these gecko-like adhesives, which can be turned ON and OFF and reused many times, the tool grapples objects by virtually any surface, significantly reducing the requirements on other systems like perception, GN&C, and control during the grapple sequence.
Gecko Gripper on ISS
News Articles:
- Stanford engineers design a robotic gripper for cleaning up space debris
- Initial DARPA funded research

Several iterations of the grappling tool have been designed, prototyped, and tested. A scalable design that uses many sets of opposed pads was validated grappling a representative piece of debris (33kg) in a rolling test on a flat floor with relative translational rates from 0 to 2 m/s and relative spin rates from 0 to 75 deg/s. Similar tests were performed on an air-bearing floor where the tool grappled and manipulated a floating 800 lb target from a floating base with varying relative speeds and spins.

While useful, these ground-based test environments can only simulate zero-g in a subset of degrees of freedom (i.e. x-y but not z). Oftentimes, gravity actually complicates the testing environment and must be compensated for with additional support structures. The parabolic aircraft environment will allow a full 6 degree of freedom zero-g test, which will provide critical data on the performance of the tool as well as give the team invaluable operational experience that may influence the design.

During the parabolic aircraft testing, we hope to achieve two objectives:
1. Demonstrate grappling of a small floating object using a floating tool in full 6 degree of freedom environment: This test simulates the case where two objects of comparable size dock, for instance a small sat and a spent fuel stage.
2. Grapple a high-inertia object using a floating tool: This test simulates the case where a small satellite is grappling a large object, for instance a cubesat attaching to a large communications satellite or a free-flier perching on the ISS.

In each case, multiple spacecraft surface types will be tested including solar panel, composite panel, anodized aluminum, and Kapton thermal blanket. Multiple tests will characterize performance in terms of variables like applied preload, misalignment, and pull off vector.