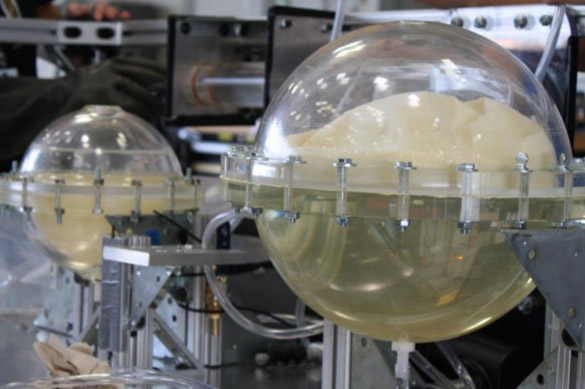 The interaction of liquid and diaphragm, that is, a coupled liquid and deformable solid dynamics problem in accelerating spacecraft, remains an expensive modeling problem. To assure mission success and flight safety, wise design of these systems is critical. Simplifications to the design process are needed to make computations sufficiently affordable for the companies that supply NASA and commercial spaceflight diaphragm systems to deliver appropriate minimum-mass but safe designs. This flight testing will advance propellant diaphragm technology. The proposed payload tests dynamic responses of elastomeric diaphragms in typical propellant tank geometries to create validated criteria for design use.

High-acceleration spaceflight missions require use of diaphragms to control propellants. Future comet retrieval or rendezvous, on-orbit servicing, etc., missions can not rely on small accelerations. Modeling of the dynamics of mixed liquid and deformable solid motion remains computationally expensive, so simplifications are sought. One such simplification for design relies on a nondimensional parameter for diaphragm and liquid interactions and this needs to be advance to TRL-6.

The data from a previous flight and this flight will establish two certain values of a simple parameter based on diaphragm structural characteristics and liquid properties as the division between the three regimes of stiffness and liquid impact. Flights in 2011 produced data inefficiently, leaving the primary question unanswered and TRL approaching 5. TRL 6 will be achieved after the flight plus knowledge of performance differences from traditional technology. Testing to reach TRL 7 or expanding

The technology is relevant to the low-gravity conditions of spaceflight, including LEO, asteroid, lunar, Martian, and other missions.