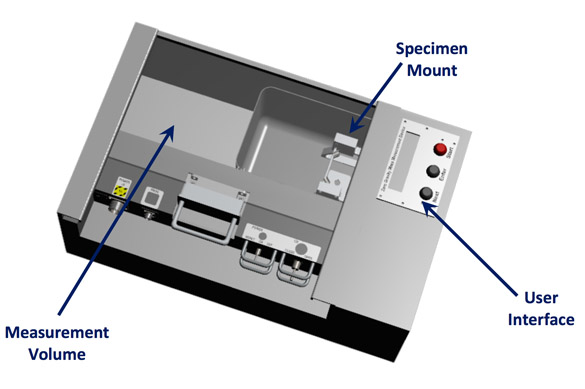 Mass is a primary measurement for science experiments, and there are currently no devices available for use in microgravity that can accurately measure the mass of objects with relatively low mass. The Zero Gravity Mass Measurement Device (ZGMMD) provides the ability to quantify the mass of objects ranging from 1 to 100 grams in the microgravity environment. Housed in a small rectangular enclosure, ZGMMD provides for emplacement of a sample in an enclosed volume. Translational motion is induced on the sample to impart a known acceleration profile, from which the resulting force is measured and the mass of the sample is computed. The objective of the flight test is to operate the ZGMMD and test its functionality and performance in a microgravity environment, similar to its planned application in an orbiting laboratory such as ISS. Human factors operational considerations will also be tested during this flight evaluation.

There are currently no mass measurement devices available on the International Space Station (ISS) that can accurately measure objects with a relatively low mass, or objects sensitive to accelerations, such as live animal specimens. Ground-based biology (plant and physical science) researchers use mass measurements as a fundamental data parameter. In order to compare microgravity research results with experiments conducted on the ground, mass measurement capabilities are essential and must be provided in the space laboratory setting. Experimental procedures are restricted without an appropriate mass measuring device, one of the most basic instruments in any scientific laboratory.The Zero Gravity Mass Measurement Device (ZGMMD) will provide the ability to quantify the mass of objects, including live animal specimens, in the microgravity environment on-board the ISS.

Biological (plant and physical science researchers in microgravity), such as current rodent research being conducted on the International Space Station (ISS).