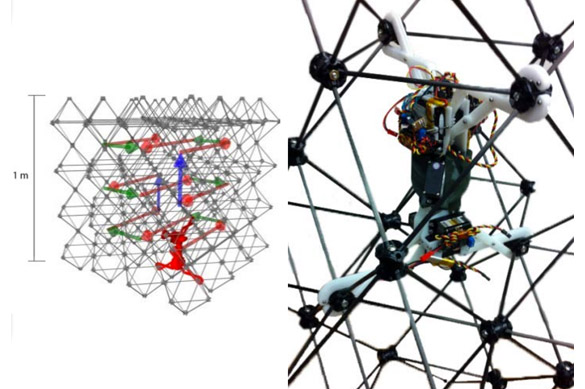 MOJO: The Multi-Orthogonal Jaunting rObot, is a robotic system specifically designed to traverse and inspect a 3D reversibly-assembled discrete lattice structure. The robot is optimized to operate within a periodic lattice structure, enabling simplification over current state of the art structure-traversing robots. The parabolic flights will assess the impact that microgravity has on the energy consumption, reliability, and maximum traversal speed of the robot, and explore what specific adaptations can be made to the robot that improve its performance in this environment. The project will contribute to the automated assembly of large space structure, a key milestone in NASAâs roadmap for space technology, enabling lightweight, multifunctional materials whose final size can far exceed the envelope of the launch vehicle in which it was launched.

Paper (2017): A Mobile Robot for Locomotion through a 3D Periodic Lattice Environment

Automated assembly of large space structures is critical in NASAâs roadmap for space technology. State of the art framework construction robots use multi-degree of freedom (DOF) manipulators with linear railways to move around a structure. Truss traversing robots locomote within structures using the layout of struts and nodes. Robots designed relative to the structured environment in which they operate have distinct advantages over general solutions, including simplification of sensing, kinematics, and number of DOFs.These ârelative robotsâ align with Objective 1.1 of the NASA 2014 Strategic Plan, enabling repairable, large-scale, deep-space habitats and vehicles, as well as several TA12 topics such as lightweight structures.

After performing locomotion and maneuvering in a simulated operational environment, MOJO will be at TRL 5. Successful flight testing will advance the state of the art by providing an autonomous traversal and inspection platform of extremely large structures in microgravity environments.