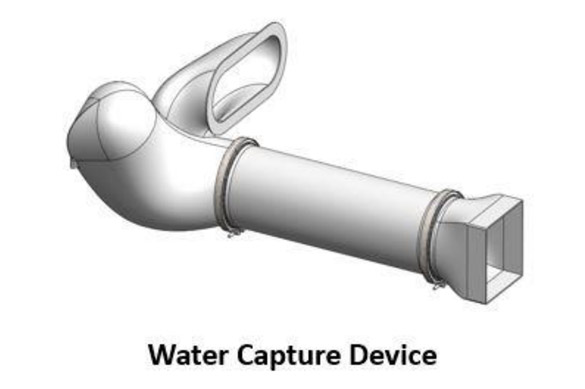 The ORBITEC Water Capture Device (WCD) is an innovative concept that uses unique microgravity-specific phenomena in a novel way to create an efficient (lower mass, lower power consumption, higher reliability) means of capturing, transporting, and collecting sparse airborne liquid droplets. This technology can be used for a variety of human spaceflight ECLSS subsystem applications, such as humidity removal, integrated temperature and humidity control, condensate and wastewater recycling, food production, and hybrid life support. The flight aboard Zero Gravity Corporationâs ZERO-G Weightless Lab will test the WCDâs functionality in a microgravity environment similar to that in an operational spacecraft.

There are a variety of requirements to collect and manage liquids in human spaceflight life support systems including condensate from dehumidification systems, wastewater management, and other fluid systems applications that require separation of the gas and liquid phases in a common flow field. The ORBITEC Water Capture Device (WCD) is a passive, unpowered device that separates liquid and gas phases of a flow with NO moving parts. This passive device for liquid collection and management provides a higher long-duration reliability, lower-power, and lower-mass option for future crewed spacecraft applications. This will be especially important for future long-duration missions where water recycling is most valuable.

Currently the WCD is at TRL-6. Several low/medium fidelity system/component breadboards and a full-scale model have been built and tested in 1-g on benchtop, in low-gravity drop tower experiments, and a first series of parabolic flight tests in February 2016.

Based on the data obtained from the first parabolic flight tests, ORBITEC has identified options for reducing the size of the WCD. Incorporating these features into the WCD would result in moving back to TRL-5; completion of additional parabolic flight tests from this proposed effort, will bring the WCD back up to a solid TRL-6, ready to be tested in orbit.

The WCD, as a component of ORBITECâs Humidity Removal System and other ECLSS subsystems, will have a variety of applications to long-duration spacecraft and habitats for humidity removal, integrated temperature and humidity control, condensate and wastewater recycling, food production, and hybrid life support; ORBITEC has immediate applications for a bioregenerative food production system and temperature and humidity control system for space habitats.