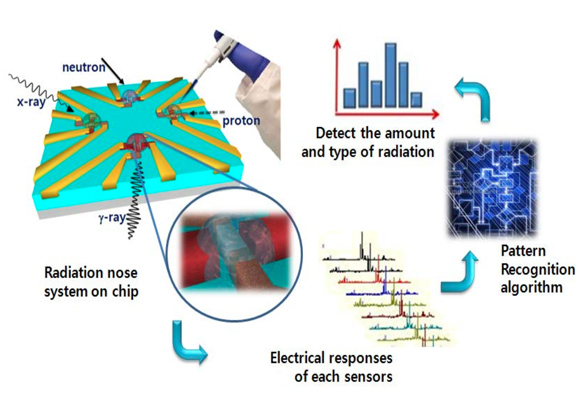 The goal of this project is to flight-test a postage-stamp sized chip to detect radiation sources (alpha, gamma, X-ray, protons, etc.) and their energy levels, like a radiation nose (r-nose). This system will use a conventional semiconductor capacitor, except that its dielectric is replaced with a liquid dielectric. Some gels react to radiation exposure with a change in molecular structure, leading to a change in properties such as dielectric constant and polarization. Inspired by such responsiveness of gels, we propose to construct a capacitor with a radiation-responsive liquid as a dielectric replacing the conventional solid-state layer. The capacitance-voltage characteristics of the liquid dielectric capacitor would change upon exposure to any type of radiation. Different types of gels that specifically interact with various target radiations can be used in an array of capacitors serving as a radiation nose to discriminate different radiation sources.

Radiation exposure is a serious issue in manned space exploration. The impact of radiation on electronic equipment and other payloads is also a major concern. The knowledge base in these areas is typically developed through ground-based testing and modeling efforts. As a rule, there is no in-situ monitoring of various radiations and their energy levels during the missions as the equipment is bulky, expensive, and needs trained operators.