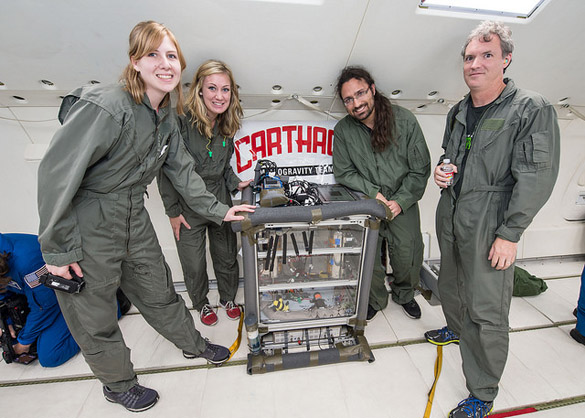 The Modal Propellant Gauging experiment seeks to demonstrate the infusion potential of a non-invasive, inexpensive, and robust method for gauging both settled and unsettled propellant at gauging resolutions of 1% for settled propellants and 2-4% for unsettled, sloshing propellants. Phase III of the project represents a significant expansion of the previously funded program objectives to address immediate needs in the Orion/SLS Exploration Mission architecture. Specifically, two central objectives are: (1) Demonstrate 1% zero-g gauging resolutions of baffle-settled realistic propellant simulant in model propellant tanks with internal propellant management structures, (2) Verify a central hypothesis of the MPG approach, which is that the mass-loading of tank walls (and therefore the modal frequencies) is uniquely determined by the adhered liquid layer.

This work is a continuation from T0160.

In order to meet the objectives, two distinct experiments will be carried out. The first objective will be accomplished using the MPG parabolic flight rig with baffle-settled propellant simulant. Isopropyl alcohol (IPA) will be used to better represent the Bond Number and other liquid-structure parameters of cryogenic propellants in real tanks. The existing composite overwrapped vessel (COPV) tanks will be outfitted with propellant management devices and ring baffles to accurately reproduce the internal structures of the Orion propellant tanks. The baffles will be designed and tested to produce settled liquids within seconds after the onset of zero-g portion of the parabolic flight trajectory.

The second objective will be accomplished by establishing a zero-g equilibrium liquid surface at three different fill fractions in simplified model tanks. The modal frequency spectrum will be correlated at each fill fraction to the adhered liquid layer mass using cameras to verify surface equilibrium and to measure adhered liquid mass fraction, and by using the standard modal sensors and computational hardware to measure modal response.