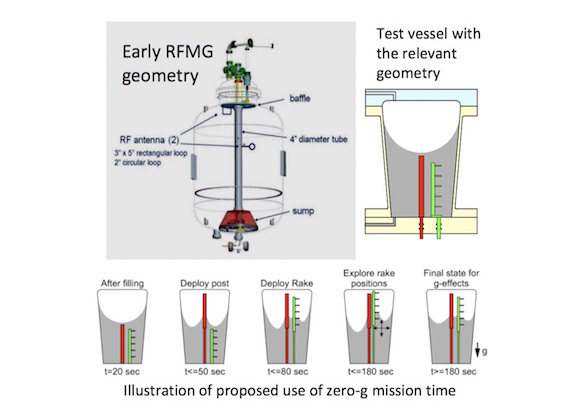 This fluid experiment will provide benchmark low-gravity data to feed into the development of a Surface Evolver model of low-gravity fluid configurations inside a cryogenic tank (more on Surface Evolver). This modeling by Purdue University under contract with NASA is to support an upcoming orbital technology demonstration of the Radio Frequency Mass Gauge (RFMG) instrument (see T0007). This particular suborbital payload will fly on a single Blue Origin flight in their standard-sized single-height payload locker and will be accommodated by the standard mass, size, control, power, and data acquisition resources.

Future long-duration human space exploration missions will depend on rapid, repeatable cryogenic propellant gauging. NASA's Radio Frequency Mass Gauging (RFMG) is on the path to become one of the primary low-g gauging method for these missions. It is included as a secondary instrument to gauge the cryogenic tank in low-gravity for an orbital technology demonstration onboard the ISS called Robotic Refueling Mission 3 (RRM3). Also included in the RRM3 cryogenic tank is a wet-dry sensor rake that will provide some information about the liquid-vapor interface location. Accurate modeling of the low-gravity fluid configuration will help correlate the data from the RFMG with the wet-dry sensor rake data, and thereby enable a more accurate comparison of the fluid quantity using both methods.

Questions to be addressed by the suborbital fluid experiment and the RFMG modeling effort:
1) What are the large-scale effects of the post and sensor board on the free surface (interface between liquid and vapor) and are these predicted properly?
2) Is there a sensor board position which leads to (undesired) critical wetting of the gap between the board and post?
3) What are the effects, if any, of the small diameter sensor probes which protrude from the board on the free surface?

Future customers for the RFMG technology potentially include all cryogenic in-space vehicles and upper stages in NASA, industry, and military spaceflight as well as future cryogenic propellant depots and transfer systems.