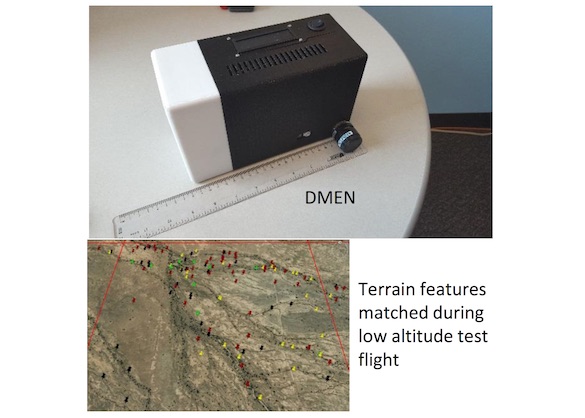 Draper has developed a vision navigation solution, the Draper Multi-Environment Navigator (DMEN). DMEN consists of a suite of sensors (camera, IMU, barometer, and magnetometer), with sensor circuitry, a computer, and a powerful suite of algorithms to process the sensor data into a navigation solution. The algorithms include Mischief and SAMWISE (tightly coupled visual-inertial odometry), and IBAL and Lost Robot (visual terrain-based absolute positioning). The Technology Readiness Level for Entry, Descent & Landing (EDL) applications is currently at TRL-4. A campaign of 2 high altitude balloon flights will be used to gather valuable data in the high altitude descent regime to push DMEN towards becoming a full EDL navigation solution.

As exploration reaches further into the solar system both human missions and a multitude of smaller craft will perform will need to perform Entry, Descent & Landing (EDL) to complete their missions.

DMEN has achieved high TRL (6-7) for both ground and low altitude operations, but for the Descent portion of EDL is held at TRL 4 until it can be tested in a relevant environment. High altitude balloon flights will allow for the collection of data and validation of algorithms in this environment, advancing the system to TRL 5.

DMEN is designed to operate as a low SWAP (Space, Weight and Power) navigation sensor for EDL. It can be used on human or robotic missions with a landing component as well as in orbit near small bodies. It is already being used for GPS-denied navigation in guided parafoils for the US Army, high speed drones for DARPA, and wearable astronaut tracking for NASA.