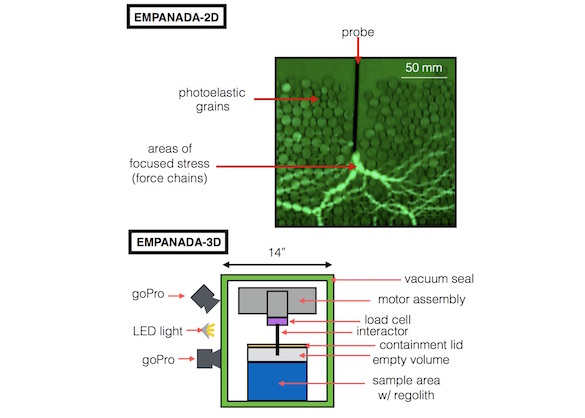 Ejecta-minimizing operations will be important for future exploration of small asteroids and other small planetary bodies, where the escape velocities can be on the order of cm/s. Presently, there are no established safe and effective protocols to guide the interaction of space probes with asteroids/comets composed of poorly-consolidated material. Preliminary ground-based experiments have shown that flexible probes are a promising route. The use of slow, flexible probes is a potentially transformational approach which is bio-inspired by the growth of plant roots. These flight demonstrations will (1) advance fundamental knowledge of the stability of microgravity granular materials and (2) develop a test-bed for creating safe and effective interaction protocols for probe insertion and anchoring. EMPANADA will allow an exploration of a range of flexible probes in both asteroid regolith simulant and photoelastic granular materials that allow the quantification of internal forces.

Protocols to minimize ejecta from interactions with planetary regolith in a low-gravity environment are critical for the safety and proper operation of experiments (either human or robot) on the surfaces of objects such as Near-Earth Asteroids where the surface gravity is often less than 0.001g. EMPANADA will consist of 5 interaction chambers based on the existing PRIME platform (see T0154), each of which is a unique experiment. Several modes of data collection will be utilized: contact forces via photoelasticity, force load on probe, and ejecta volume.

Four chambers (EMPANADA-3D) will comprise and utilize simulated regolith; one chamber (EMPANADA-2D) will perform photoelastic measurements of interparticle forces. The slow, flexible probes, the interaction assembly and the photoelastic response imaging system are the new technologies tested. All systems will be at TRL-4 before the parabolic flights and at TRL-7 after completion of the flight test plan.

Potential end-users include planetary scientists and other granular materials scientists interested in studying granular mechanics at variable microgravity levels, as well as users interested in understanding regolith behavior for exploration or ISRU purposes.