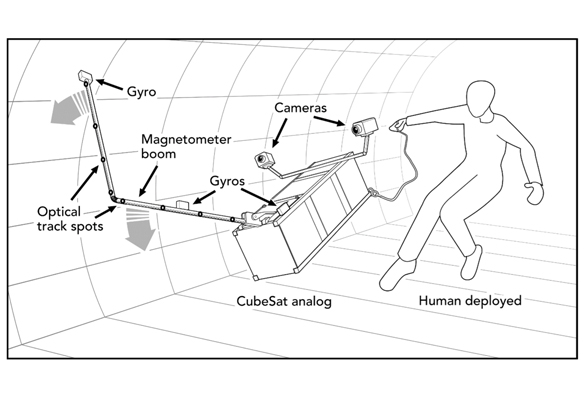 The Ex-Alta 1 CubeSat, launched in May 2017, carried a miniature scientific caliber fluxgate magnetometer and a ~60 cm deployable boom. The design is smaller and lighter than the existing state of the art and is easily accommodated as it mounts on the outside of the spacecraft. However, only extremely limited pre-launch testing was possible on the Ex-Alta 1, spacecraft attitude control issues have prevented analysis of the on-orbit performance of the boom, and technical risks were identified with the elbow joint. The lightweight boom design cannot deploy in surface gravity and is not suitable for traditional de-weighting techniques so its deployment must be tested in micro-g conditions. The objective of this flight test is to validate and characterize two improved variations of this CubeSat magnetometer boom through a parabolic flight experiment where the two booms are repeatedly deployed and their deployment and final orientation is tracked using motion capture.

Magnetic field measurements are essential for near-Earth, interplanetary, and planetary missions and for the study and future forecasting of space weather. Recent instrumental advancements have focused on making smaller and low power instruments to enable constellation missions of many low-cost spacecraft. Magnetic field instruments are now small and light enough to be carried by CubeSats of ~10x10x30 cm. However, the magnetic field sensors need to be held away from the magnetic noise of the spacecraft on long deployable booms, and no robust and reliable solution currently exists for CubeSats.

Micro-g conditions will be provided by parabolic flights of a B727-200 aircraft operated by the Zero Gravity Corporation. The repeatability and reliability of the CubeSat magnetometer booms will be assessed using two experimental apparatus comprising the prototype booms, mass-equivalent CubeSat structures, and optical tracking and gyroscope instrumentation to capture the boom's motion.

The booms tested under this flight demonstration, when combined with an existing miniature fluxgate magnetometer, will enable robust and low-cost multipoint magnetic field measurements through CubeSat constellations. This directly addresses the 2015 NASA Technology Roadmap priority for "technologies that allow high-stability magnetic field measurements to be made in distributed systems" (TA 8.3.1.3).