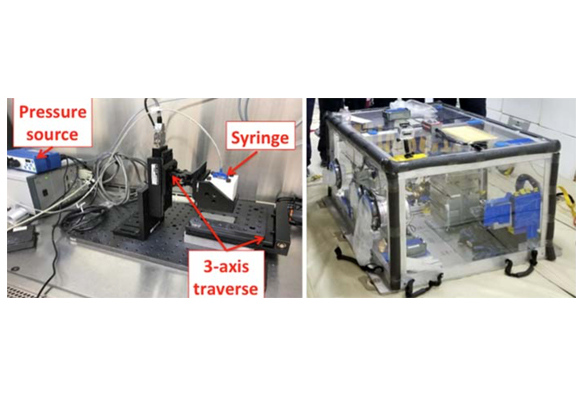 During this flight demonstration, a series of metal oxide foam test specimens (i.e. nanoparticle-based Titanium Dioxide (TiO2) aqueous foam emulsions or inks) will be printed in microgravity (ÂµG), using two parabolic aircraft flights. The hypothesis is that when the foams are created and printed in microgravity, they should be more stable and more uniform than when similar processes are used to print and post-treat the foam under normal Earth gravity conditions. Also, based on the Nakahara effect, which states that memory can be imprinted on pastes or emulsions, it is hypothesized that the ÂµG conditions will induce distinct memory effects on the printed specimens. Such processing-specific memory effects may be manifested in distinct mechanical and microstructural properties.

The payload apparatus consists of an in-house built pneumatic-based extrusion 3D printer that will be integrated into an existing payload frame and enclosure. Mechanical, electrical, and microstructural post-flight characterization data from the ÂµG-printed specimens will be compared with similar data for a series of otherwise identical baseline Earth-printed specimens.

The proposed foams have promise for space applications, including use for radiation shielding for future human space exploration missions, use in solar cell arrays and/or batteries, use in embedded sensors, and for water and/or air photocatalytic treatment.