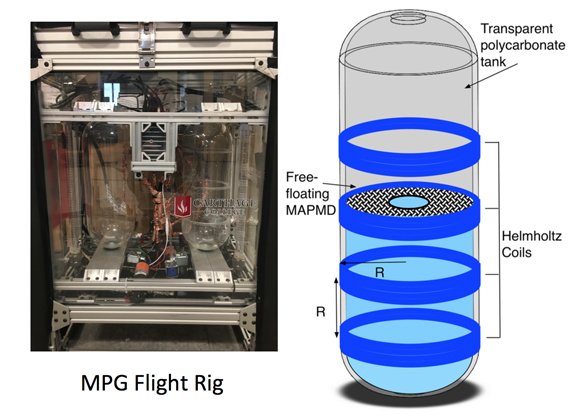 The Magneto-Active Slosh Control System is one element of a larger modal propellant gauging (MPG) effort to reduce gauging errors in spacecraft and launch vehicles. This technology â a magneto-active propellant management device (MAPMD) â enhances the gauging resolution of MPG in sloshing propellant. The MAPMD is a free-floating diaphragm positioned autonomously within the liquid using small magnetic field gradients. When integrated with the MPG tanks, MAPMD stiffens in response to slosh surges and remains near the liquid surface of a cylindrical tank. A camera system will measure slosh suppression during parabolic flight testing.

The integration of active slosh suppression into the MPG architectures promises to address a key NASA technology roadmap goal of in-space propellant gauging of unsettled (sloshing) propellant with an accuracy of at least 2%. With current propellant margins of 10% or more require to accommodate uncertainties in gauging, the MASC effort represents a substantial economic benefit across commercial space industries while providing enhanced mission flexibility. If MASC can be demonstrated to scale well to launch vehicles, the increased safety margins afforded by reduced probability of slosh-induced instabilities will be of substantial benefit to commercial launch providers and to the SLS/Orion program.

Objective of the flight tests is to demonstrate the ability to position the diaphragm using field gradient positioning, measure reduction in slosh amplitude of low-gravity propellant slosh when the diaphragm is activated, and to correlate slosh reduction with enhanced low-G gauging resolution.