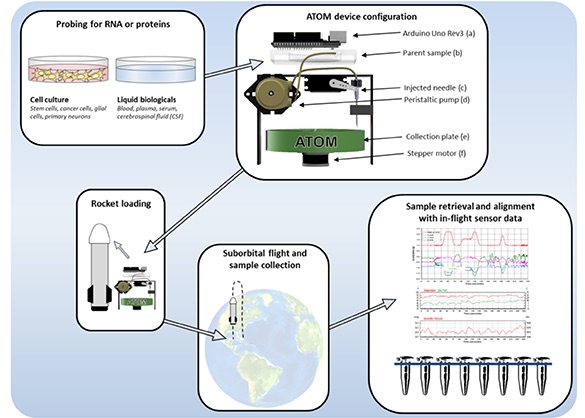 The Autonomous Technology for Research in Suborbital Microgravity (ATOM) aims to enable second-by-second testing of biological changes during launch, flight, and landing. About the size of a 2-liter soda bottle, this battery-powered device automatically collects and deposits a sample into a well containing a preservative. ATOM then rotates so another well can receive a subsequent sample. By analyzing these collections against data from acceleration, temperature, and pressure sensors, ATOM may help researchers identify when during flight any changes to the sample occurred.

This technology is designed to fill the need for a biological sampling device that can capture second-by-second biological changes and link them to the different stages of suborbital rocket flight. This technology is hands-free and could detect even small changes in any biological sample during very short suborbital flight. It is customizable and has the potential for future development that includes solar-powered, on-board analysis and data transfer back to Earth. This experiment will determine if the device in a flight environment is capable of accurately collecting samples that can be later assessed in lab.

Currently at TRL 4, this technology has an anticipated TRL of 6-7 following a successful demonstration.