Flight Test of a Balloon-borne Aeroseismometer 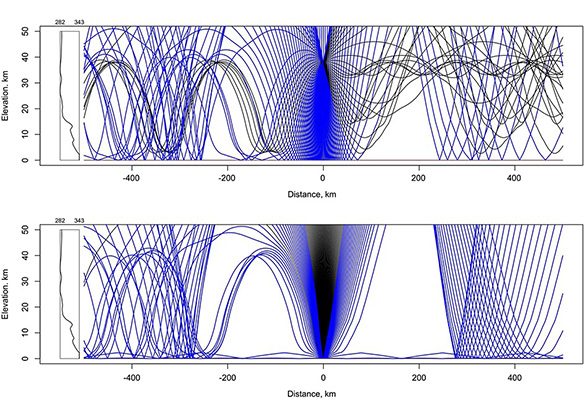 Low frequency sound, or infrasound, carries information about forces imposed upon planetary atmospheres as well as the wind, temperature, and composition of the medium between source and receiver. Acoustic sensing is therefore an increasingly valuable component to terrestrial and planetary investigations from the subsurface to the atmosphere/space boundary. Recent experiments in Earth's stratosphere has shown that balloon-borne infrasound detectors are a viable means of capturing acoustic waves at great ranges and over inhospitable environments (e. g. the open ocean). The work has implications for determining seismic activity on Venus, which is an open scientific question that, if resolved, would shed light on the planet's current activity levels and interior structure.

Prior publications:
Infrasound in the middle stratosphere measured with a free?flying acoustic array (2015)

The primary challenge of balloon-borne infrasound sensors is the lack of direction finding. Since pressure measurements are scalar values (not vector values like seismometers, for example) sensors on a single balloon cannot determine the azimuth of arrival. The consequences of this are twofold: 1) difficulty in distinguishing true far field waves from local noise (e. g. turbulence) and 2) lack of constraint on possible source regions for an incident signal. However, a serendipitous measurement taken on a coupled infrasound/accelerometer payload on the 2016 High Altitude Student Platform (HASP) indicates that the balloon itself is set in motion by even very small acoustic waves impacting the envelope. As a result, the entire flight system can be leveraged as a pendulum seismometer; the resulting motion can be captured using accelerometers and thus provide direction of arrival information for incident acoustic waves.

The instrumentation is presently at a TRL of 4/5, and at the conclusion of the project would achieve a TRL of 6.

The combined infrasound/accelerometer sensor concept is a "technology candidate" since, once realized, it will enhance existing NASA missions and may lead to novel new capabilities. The technology extends powerful subsurface characterization methods developed in seismology into the atmosphere, permitting both geophysical and atmospheric science investigations that would be difficult or impossible otherwise. The primary user would be the NASA Science Mission Directorate.