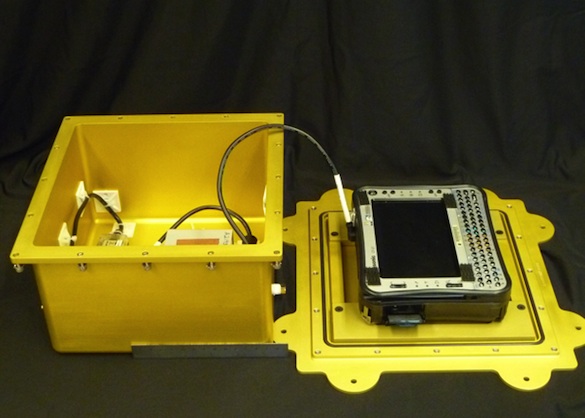 This technology is an evolution from Technology #7: Radio Frequency Mass Gauge on Parabolic Flights. Here, the objective is to gauge the liquid oxygen tank of the Masten Space Systems Xaero suborbital Reusable Launch Vehicle (sRLV) by installing an antenna inside the tank and collecting data with RFMG electronics mounted in the payload area during the sRLV flight. After the flight, the RF gauging data will be compared to Masten's own measurement or estimate of liquid quantity during the flight. A minimum of one flight test is requested, but prefer to fly on as many subsequent flights as possible to gain a maximum return on investment.

Acquiring low-gravity test data is undoubtedly the only way to demonstrate that the RFMG can accurately and reliably gauge the liquid quantity in low-gravity. The RFMG has been successfully tested in liquid oxygen and liquid hydrogen 1g tests at the NASA GRC cryogenic test facilities. Testing of the RFMG on a sRLV flight will enable us to address one of the TRL-6 milestones for In-Space Propulsion Systems; Propellant Storage, Transfer and Gauging: Demonstrate microgravity quantity gauging of LO2 and LH2.

Upon successful completion of these tests, core elements of the RFMG will advance to TRL-7: System prototype demonstration in an operational environment. At that stage, the technology will be relatively low-risk for implementing on other space-based payloads or vehicles.

The RFMG was developed to fulfill the need for a low-gravity propellant quantity gauge, and may find use in future exploration vehicles such as a Cryogenic Propulsion Stage or space-based propellant depot. Commercial niche applications of the RFMG may include gauging of space vehicle propellant tanks, cryogenic liquid storage tanks and aircraft fuel tanks.

The primary objective of the sRLV test of the RFMG is to demonstrate accurate real-time propellant quantity gauging of a sRLV propellant tank during ascent, coast (low-gravity), and return to Earth.

The RFMG payload mass is approximately 6 kg, occupies only a small volume (12'' x 12'' x 6'') and is self-powered via the computer battery pack (5 W). The RFMG payload includes an antenna assembly that will need to be installed inside the LOX tank of the sRLV. The RFMG will record gauging data throughout the sRLV flight, from launch to landing.