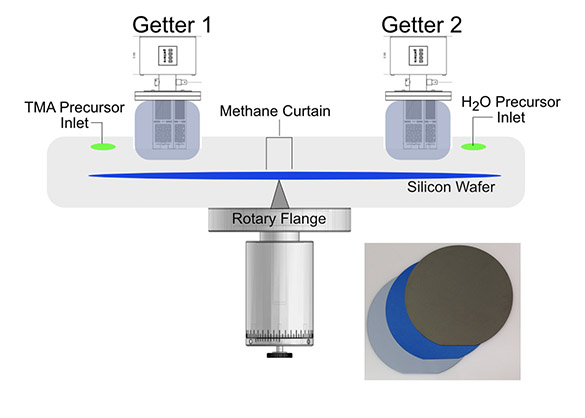 The in-space assembly of spacecraft and spacecraft subsystems provides a way to improve the aperture size, decrease complex deployment risk (JWST) and assemble systems that exceed the size constraint of launch vehicle payload volume. An area that has been lacking in technology development is the ability to provide multi-functional coatings to spacecraft system components â most importantly, the ability to coat large area telescope mirrors in the vacuum of space. Concepts have been proposed to address the need to grow optical substrates in space via additive manufacturing (AM) ranging from small mosaic tiles to large multi-meter segments. Ultimately, the functionalization of these mirrors to achieve specific wavelength science requirements will have to be deposited on these mirrors in-space. This flight experiment addresses this need by developing a bench scale verification unit that will produce coated mirror coupons specifically Aluminum oxide (Al2O3) during the microgravity portion of the test campaign using the Atomic Layer Deposition (ALD) technique.

Atomic Layer Deposition (ALD) is a cost-effective nanoadditive-manufacturing technique that allows for conformal coating of substrates with atomic control in a benign temperature and pressure environment. Using paired precursor gases, thin films can be deposited on flat or textured surfaces ranging from glass, polymers, aerogels, and metals. Through atomic layer control, where single layers of atoms are deposited, fabrication of metal transparent films, nano-laminates, and coatings of nano-channels and pores is achievable. Reaction mechanisms in ALD are normally self-limiting, allowing for atomically accurate control of nanometer (nm) thicknesses. It is the simplicity in the ALD process that allows for a simple reactor design encompassing a reactor volume and electro-pneumatic valves to allow gas pulsing and thus it can be readily tested in-space.