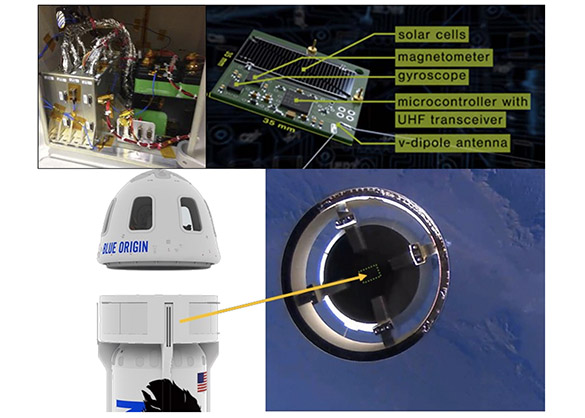 A ChipSat is a very small open-source, 2-4 gram, free-flying spacecraft with actuators, solar panels, sensors, processing, communications, and structure, as well as power suitable for a wide variety of small-scale payloads. This flight test will deploy 100 discrete ChipSats near apogee of a suborbital flight, each capable of reporting attitude and position (GPS) data along with temperature, pressure, and magnetic-field measurements. They will be released through the flight-heritage deployer design roughly the size of a 3U CubeSat. The ChipSatsâ low ballistic coefficient may disperse them up to several miles from the launch site, yielding valuable, first-ever data on upper-atmospheric winds and other environmental phenomena.

ChipSats offer an entirely new capability for making in-situ measurements (at the Earth, Moon or other solar system bodies) with broad spatial and temporal resolution, for a very low cost. This flight test is intended to help raise the TRL of these devices for atmospheric entry so that they can be implemented operationally. The deployment of 100 improved (2 gram) ChipSats with GPS and networking capability is to test not only the operational measurement capabilities but also to conduct the first ever test of survival capabilities under suborbital reentry.

This technology will combine the JANUS integration and monitoring system (T0196)
with a deployer for 100 2-gram ChipSats. Upon validation of the ChipSat operation and re-entry survivability, the TRL will advance from 6 to 7.

ChipSats could effectively and inexpensively be used to examine the atmosphereâin particular, the mesosphereâin unprecedented spatial and temporal detail. This new science would greatly enhance understanding of this critical and understudied region (too high for aircraft and balloons but too low for satellites). A large population of ChipSats could also be deployed in lieu of a single large satellite or in impactor missions (e.g. for the moon or near-Earth objects).