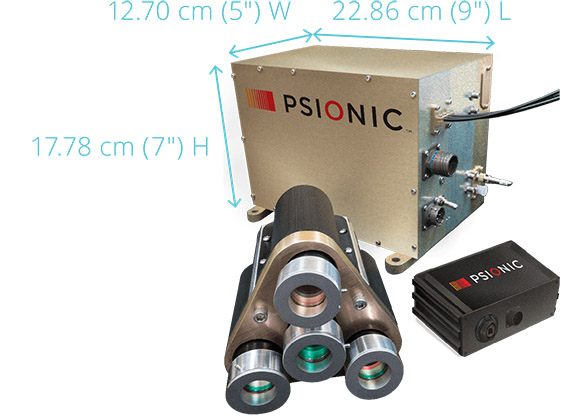 With a goal of enabling precision navigation inside tight landing ellipses, the Psionic Navigation Doppler Lidar (PNDL) is an optical laserâbased system. Measuring range and velocity simultaneously and accurately in four directions, the system provides data on ground speed, height above ground, roll, and pitch. PNDL is also designed to overcome the limitations of conventional radar while mitigating dust and plume interference. Ready for flight testing and vehicle configurable, this fourth-generation system is based on a system previously commercialized as a NASA spinoff.

Prior flights were done with Masten Space for the NASA Langley-developed Navigation Doppler LIDAR (T0098).

Presently guidance, navigation, and control systems used for landings on asteroids, the Moon, or Mars typically relies on conventional radar, including its limitations on measurement and practical performance. This solution is an optical-based measurement system to safely bring crewed or robotic lunar landers to areas of scientific interest. In this experiment, researchers will seek to validate new landing sensor geometry, measurements, and algorithms. They will collect data for follow-up algorithm refinement and signal processing design, development, and validation.

The flight is intended to validate the feasibility of using PNDL in the context of an actual lunar lander mission. If successful, the technical risks related to flying PNDL on a spacecraft will be retired, and the technology will be ready for infusion into multiple future space missions. The final TRL is expected to be 5 or 6.

Autonomous precision landing on the Moon, Mars, asteroids, etc.
Rendezvous and proximity operations, with range extended up to 10 km