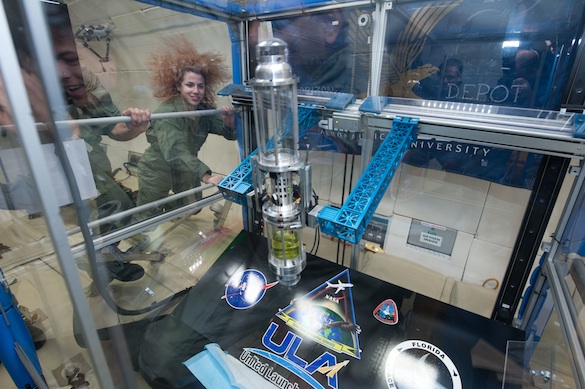 The need and demand for long term space missions, such as missions to Near Earth Objectâs (NEOâs) and interplanetary missions, is growing rapidly. To satisfy this demand, on-orbit propellant storage and transfer technologies are being developed. The ability to re-fuel a space system, once on-orbit, will provide a means of success for these types of space missions without the need for continual development and advancement of heavy lift vehicles. Additionally, the adaptation of existing technology will allow on-orbit refueling of spacecraft to become a near term reality, cutting the need for advanced heavy launch vehicle development as well as the corresponding cost, time, and manpower.

This effort was awarded an SBIR Phase I in 2019: Spacecraft On-orbit Advanced Refueling and Storage.

A successful completion of the proposed microgravity testing will advance the current knowledge of these space systems and raise the Technology Readiness Level (TRL) of cryogenic propellant transfer systems from 4 to TRL 6.

A Tri-Axis Spin Rig (TASR) developed by ERAU will be utilized to mechanically spin scale mock-ups of the propellant tanks to a predetermined angular velocity about its minor axis in a microgravity environment. Once the required angular velocity is achieved, the mock-up will be released and allowed to spin unharnessed within the test enclosure. During this period, the mock-up will perform one of three operationally similar propellant Transfer Scenarios (TS). The triggering of the TS will be done remotely and will utilize electronic solenoid valves to allow the fluid transfer to occur only when required. Once triggered, the TS will commence while onboard gyroscopes and accelerometers record changes to the systemâs angular acceleration and wirelessly transmit them to the data acquisition system. Once that particular TS is complete, the mock-up will settle at the bottom of the test enclosure, allowing the next test to be initialized. This process will be repeated for each mock-up and TS.

sRLV Testing
In addition to parabolic flight testing, sub-orbital testing will provide a means of additional microgravity testing to further advance on-orbit propellant storage and transfer system technology. The main focus of this investigation is to determine the applicability of the discussed propellant transfer methods in a microgravity environment as well as to determine the effects said methods pose on the systems rotational stability. While parabolic flight testing will be utilized to sufficiently determine the applicability of the transfer methods in microgravity, the increased microgravity time sub-orbital testing platforms can experience will provide enhanced data as to how those methods react with the systems rotational dynamics. sRLV testing will be conducted via the use of a fully autonomous spin rig that will be developed specifically for this type of testing onboard the selected sRLV.

Four identical 1:37 scale mock-ups of the Centaur derived on-orbit propellant storage and transfer system will be created utilizing the manufacturing facilities at Embry-Riddle Aeronautical University (ERAU). These scale mock-ups will be implemented with all hardware necessary to accurately simulate all transfer scenarios. Additionally, a wireless accelerometer and gyroscope will be mounted to each mock-up to measure changes to the systemâs rotational dynamics. These four mock-ups will be used during all phases of this investigation.

A total of four flights were utilized to carry out the fluid transfer experiment outlined in the Test Equipment Data Package for the April 2013 campaign. During the first three flights of the campaign, the onboard Data Acquisition System suffered from a severe malfunction that rendered it unusable. During these flights, the experiment was still carried out and a focus on video footage was taken. However, prior to the last test flight, the experiments flight computer was fixed and all was working as expected. During the last set of flight testing, a large amount of empirical data sets were gathered providing insight as to how the fluid transfer was impacted by the presence of microgravity and the results were used to determine the accuracy of computational models that were developed prior to flight.

Now that this second phase of microgravity flight testing has been successfully completed, sub-orbital flight testing can commence. This testing will utilize all of the information and knowledge obtained from the first two sets of microgravity flight experiments and ground testing to perform a longer duration propellant transfer test that will provide more insight as to the performance level of this technology during microgravity conditions. The successfully completion of the sub-orbital flight testing will provide data to allow performance predictions to be developed for testing to be carried onboard the International Space Station. The Flight Opportunities Program has provide an incredible service for advancing the Technology Readiness Level of on-orbit propellant storage and transfer technologies. The parabolic and sub-orbital platforms provided were a unique necessity to carrying out the type of experimental procedures required to advancing this technology to TRL 6 and preparing it for in depth testing onboard the International Space Station.