The UAHuntsville CubeSat is a student satellite development project to design, build, test, and operate an orbital picosatellite. The program has a primary focus of designing a 1U CubeSat system that accomplishes three primary technology demonstrations: (1) passive nadir axis stabilization for picosatellite attitude control, (2) improved communications for a stabilized 1U satellite system, and (3) deployable solar panels for increased solar power collection on a picosatellite system. The opportunity to perform microgravity deployment tests on a parabolic aircraft will increase the technology readiness level of the CubeSat deployment mechanisms to TRL 6 and will improve the understanding of how the deployable systems react in the unconstrained microgravity environment. This will allow mechanical functioning of the hardware and verification of the attitude stabilization modeling.

The testing would allow us to test a full prototype, including all of the mechanical systems, of our CubeSat in a relevant environment. As partial software integration will also be required for the testing, our TRL after the proposed testing will be 6.

The applications of this technology could be used in most CubeSats because it improves technology in power via the solar panel array, communications via the monopole antenna, and attitude stabilization via the gravity gradient boom, all of which are necessary for satellite operations.

There are five deployables that we need to test. We will trigger one deployable per parabolic arc until all deployables have been triggered.

The payload is currently in the prototype development phase. The design has not been flown before. The parabolic flight configuration is that of the orbital flight configuration with an additional protective frame to prevent direct impact to the fragile CubeSat systems. The flight environment will be a free floating payload allowing accurate reaction rates to be measured during each test. 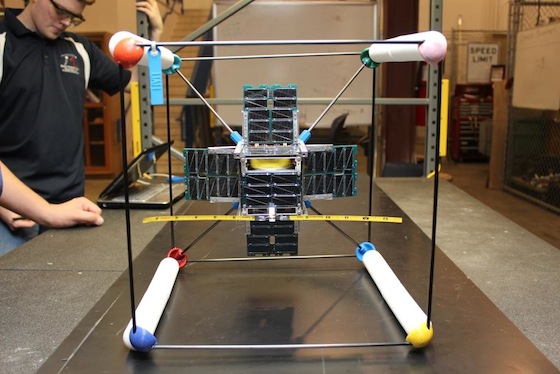