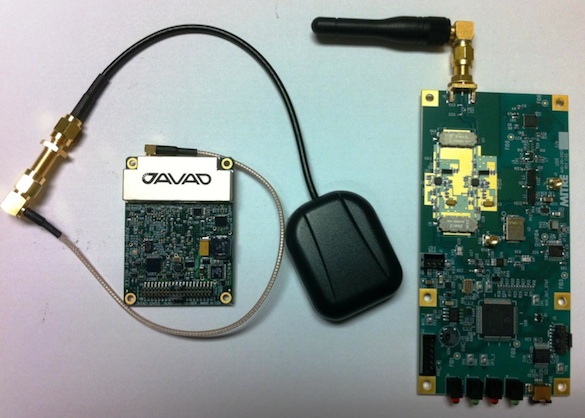 To support the periodic launch of reusable launch vehicles, some sanitization of the airspace must occur to ensure that the area around the launch and landing sites are clear of air traffic. One of the major concerns is the uncertainty of the vehicleâs descent path, especially while flying under parachute. This project aims to evaluate a prototype UAT-based (Universal Access Transceiver) ADS-B (Automatic Dependent Surveillance-Broadcast) transponder developed to support commercial space transportation. A UAT-based ADS-B receiver will provide the same capabilities that an ADS-B receiver provides for manned space flight. It broadcasts to ground-based and airborne receivers the current altitude and position of the vehicle once per second. It is anticipated that the developed prototype will become a standard payload on any flight of reusable launch vehicles once it has been proven robust and reliable.

The prototype is developed by Embry-Riddle Aeronautical University (ERAU) based upon a licensed design from MITRE for the UAT Beacon Radio â Transmit Only (or UBR-TX). To differentiate between the two units, the ERAU prototype for this flight opportunity will be named the UBR-ERAU. Developed under a contract with the FAAâs Commercial Space Transportation Office (AST), the UBR-ERAU upgrades the design of the UBR-TX in order to support some of the constraints of space flight, e.g a high-end GPS capable of supporting space velocities and altitudes.

Once the test flight is performed, the technical readiness shall increase from TRL 4 to TRL 6 because the high-quality prototype will have been fully tested within the target operating environment. By proving that the upgrades allow the unitâs operational capabilities to exceed that of the previous model, the UBR-TX, our team will have made significant progress in moving this technology forward.

The benefits of developing the UBR-ERAU to support commercial space transportation is very compelling. It is anticipated that the developed prototype will become a standard payload on any flight of reusable launch vehicles once it has been proven robust and reliable.

The payload receives real-time measurements of its GPS position and altitude. It also calculates the altitude based upon the measured barometric pressure. Once per second, an onboard microprocessor analyzes this data, produces a UAT data packet, and then transmits this data via an integrated radio and external antenna. The transmitted packet can be received by any UAT ground-based or airborne receiver within RF line-of-sight. During the flight, the ERAU team will have two or more ground-based receivers (GBR) located in geographically strategic locations to ensure that the data is received throughout the mission flight from launch, to maximum altitude, and back to recovery.

The payload has not flown on a high-altitude balloon, solid fueled rocket, or liquid fueled rocket. It is, however, comprised of a number of technologies that have flown on one or multiple of these platforms.