Collisions Into Dust Experiment on a Commercial Suborbital Vehicle 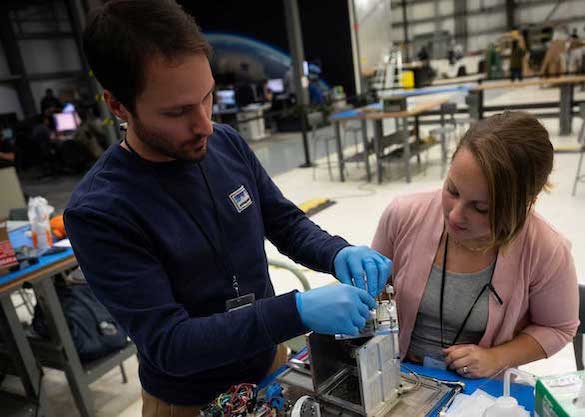 Understanding the behavior of fine particles in dusty environments in response to human and robotic activities is crucial to the success of exploration missions to the Moon, Mars, and especially to small bodies such as asteroids with negligible surface gravity. We propose to perform a low-energy impact experiment to be carried out in a zero-gravity environment using a commercial suborbital vehicle. The experiment is a modified version of the Collisions Into Dust Experiment (COLLIDE) that was flown previously on two space shuttle missions. Modifications to the experiment include individualized vacuum chambers and higher quality video data. The experiment has also been modified for autonomous operation on a commercial suborbital vehicle.

The presence of dust on the surfaces of solar system bodies raises several technical issues related to unmanned and manned exploration of the solar system. Fine grains may damage optical instruments, coat solar panels, or jam moving parts on spacecraft. Particles that enter astronaut habitats can pose a further health hazard through inhalation or contamination of seals or other equipment. A broad set of experimental data in the reduced-gravity regime in which these collisions occur is necessary to interpret the existing and ever-growing volume of data on dust in planetary systems.

Experiments dealing with dust in space environments are likely to be performed on the ISS. From a pure technology development standpoint, the proposed test will advance the TRL of components of science experiments to be proposed for use on the ISS. The technology described here has been extensively tested in a laboratory setting. The current TRL of COLLIDE-3 is 6. Through this flight, the experiment and all of its components can mature to a TRL of 8.

The results of this technology test will lead to advances in our understanding of the phenomena of dust dynamics near the surfaces of asteroids and moons with low surface gravity. These objects are the targets of planned NASA missions, including OSIRIS-Rex and potential future manned and unmanned exploration missions. It is critical for the development of experiments, hardware, and procedures to understand the behavior of regolith in response to disturbances.

These experiments will simulate the kinds of disturbances to a dusty planetary regolith that accompany both manned and unmanned exploration. High-speed video data will show the effect of the impacts on the surface. The amount and velocity of ejecta produced will be recorded. The experiment will be performed with pre-determined impact parameters such as target material, impactor mass, and impactor velocity. Granular material (simulated lunar regolith (JSC-1)) is held in place in a tray 11.5 cm x 10.6 cm x 1.9 cm until the experiment is run in microgravity conditions. A stepper motor opens the door covering the regolith tray. A shape-memory-alloy system is activated to release a spring-loaded launcher which shoots a projectile at a low speed into the regolith. Illumination for the camera is provided by an internal array of LEDs. Video data is recorded through the glass viewport. A flat mirror mounted inside the IBS provides an orthogonal view of the impact.

COLLIDE-3 is comprised of one (1) Impactor Box System (IBS) contained within an aluminum vacuum chamber, a microcontroller to operate the experiment components, and a high-speed digital video camera.