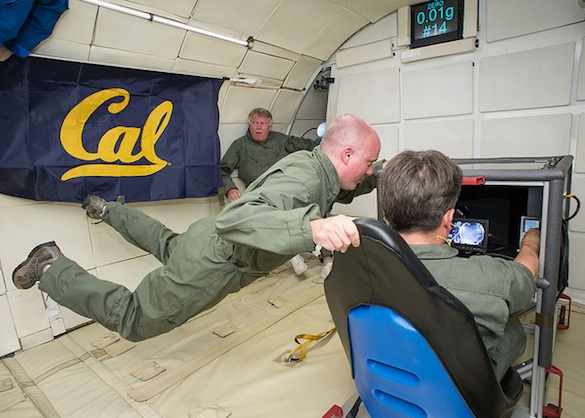 Particulate materials constitute a large part of the natural world. At grand scales, these are the dusty nebulae clouds from which stars and planets are formed. At planetary scales, particulates constitute the rings of the giant planets, global dust storms on Mars and volcanic ash plumes on Earth. Particulate materials also make up the regoliths, soils, and sediments of solar system bodies. On Earth, they form the reservoirs for water, gas, and oil. Many scientific disciplines, engineering applications, and industrial pursuits involve the study or handling of particulate matter occurring in the form of powders and granules. In most cases, there is a need to be able to predict the behavior of these materials, and this in turn requires knowledge of the fundamental physics that causes particles to attract or repel one another. We will study these particulate materials while they are freely suspended and dispersed in reduced gravity in order to unmask weak forces.

In the short term, we have to address the technical challenge of initializing an experiment by first dispersing particulates in a test chamber, then maintaining this dispersion without the material being lost to the chamber walls by adhesion. This is technically non-trivial as we have experienced with particulate dispersions on Space Shuttle (USML-1&2). We have fabricated and tested a mechanically robust vibrational apparatus, the Particle Dispersion System (PDS) that can perform the dual function of initial dispersion and maintenance of particle-free walls. It is a mechanically straightforward system with a 2-axis variable vibrator mechanism mechanically coupled to the walls of a small sealed dispersion chamber. The chamber will be internally illuminated and viewed through a window with a fixed position video recorder.

The payload in its current form and in the form that it will have prior to parabolic flight is consistent with the definition of NASAâs TRL 4, namely, it constitutes a breadboard/brassboard that has been validated in a laboratory setting. Operation of PDS in near zero-g on parabolic flights will advance the system to TRL 5, i.e., it will demonstrate 1) that the proof-of concept functions in a relevant environment and 2) that the observed particle behavior corresponds to that predicted from analy

The intended application of the PDS is to conduct studies aboard commercial reusable vehicles that can provide several minutes of zero-gravity. The vibration technique as proposed, has application to: (1) Scientific instrument development for the study of intergranular forces, (2) Manufacturing techniques in low-g that require powder dispersal and homogenization and (3) Maintenance of particle-free surfaces (manufacturing, testing, contamination control).

We intend to test the PDS with a series of parabolic aircraft flights. The key goal at this stage is to characterize the vibrational frequencies and amplitudes that are effective at particle dispersion for a variety of particle types. In the weightless parabolic flight environment, multiple parabolas as well as multiple flights will enable the testing of a series of variables that affect particle dispersion and electrostatic charging, viz, the intensity of the wall vibration, vibration frequency, vibration duration, particle size and shape, particle elasticity, and cloud density. Observations recorded on video will include dispersal efficiency, maintenance of particle-free walls, particle trajectories (direction and speed), and particle interactions such as the formation of aggregates.

The apparatus consists of a small (20 cm diameter) dust dispersion chamber with a two-axis vibration mechanism mounted behind the chamber. This can vary both the magnitude and frequency of vibration. The chamber itself has a large window that will be viewed by a video camera with a magnifying lens.