Effects of Reduced Gravity on Flow Boiling and Condensation 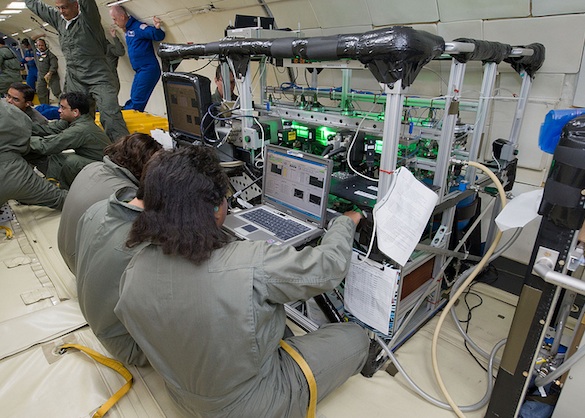 As space missions increase in scope, size, complexity and duration, so do both power and heat dissipation demands. This is particularly the case for future manned missions to Mars. Paramount to the success of these missions is the ability to reduce size and weight, including those of thermal management sub-systems. Based on NASA/TM-2004-212940 (Workshop on Critical Issues in Microgravity Fluids, Transport, and Reaction Processes in Advanced Human Support Technology) in the focus area of Thermal Systems and Phase Change Processes, there is a need for improved energy-to-mass ratios, which suggests replacing present single-phase operations with two-phase systems. The transition from single-phase to two-phase thermal management can yield orders of magnitude enhancement in evaporation and condensation heat transfer coefficients.

Important fluid physics mechanisms associated with two-phase systems are flow boiling critical heat flux (CHF) and condensation. Most of the two-phase heat transfer know-how amassed over nearly a century of research comes from experiments that were conducted in Earthâs gravity. This study aims to develop an experimentally validated, mechanistic model for the minimum flow criteria to ensure gravity independent flow boiling critical heat flux (CHF) and condensation. This will require performing extensive parabolic flight experiments in preparation of long-term International Space Station (ISS) experiments. A novel flow boiling and condensation apparatus has been developed jointly by Purdue University and NASA Glenn research Center to perform experimentation to better understand and evaluate the mechanistic models governing such phenomena in terrestrial and reduced gravity.

The system is at TRL-4. The experiment will utilize a flow boiling system prototype developed previously, along with two new prototype condensation modules. The test results together with the work done at GRC will permit the next level full scale prototype of the system to be designed for evaluation prior to building a mission ready system. By testing and determining the viability of the prototype in an applicable environment under reduced gravity, TRL can be advanced to 5 or better

Besides NASA, the phenomena at the center of the proposed work (flow boiling and condensation) are of paramount importance to the design of numerous commercial systems and sub-systems. Examples include both fission and fusion nuclear reactors, refrigeration and air conditioning systems, computer electronics, avionics, telecommunication satellites, x-ray medical devices, and metal heat treating.

The flow boiling system consists of a transparent flow boiling module attached to a closed FC-72 flow loop. The flow boiling module facilitates simultaneous heat transfer measurements and high-speed video imaging of flow boiling behavior. The rig is also equipped with two separate condensation modules and a separate water cooling loop. One module is instrumented mainly with thermocouples and pressure transducers and is occluded from visual observation. The second condensation module is instrumented with window ports, high-speed cameras, optical diagnostics and illumination systems. The purpose of the second condensation module is to observe and characterize the interfacial wave motion of the FC-72 condensate film during the important annular flow regime.