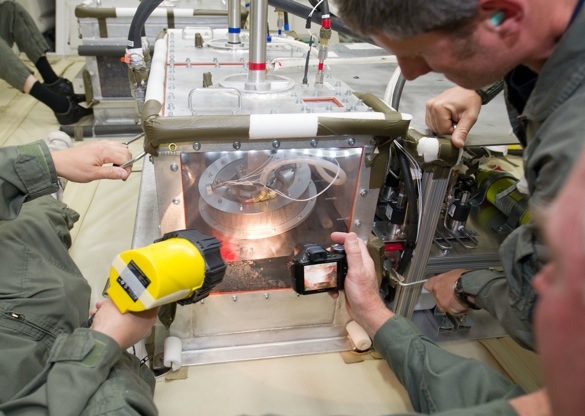 Extensive ground testing and two previous reduced gravity flights have demonstrated the viability of the regolith sampling system. Test series demonstrate sample acquisition in the relevant low-g environment to contribute to achieving TRL-6 prior to the OSIRIS-REx Preliminary Design Review (PDR) in the first quarter of 2013.

Besides OSIRIS-REx, these tests will also benefit any other asteroid or comet nucleus sample acquisition mission in the future by demonstrating the effectiveness of the regolith gas fluidization sampling technique. Future commercial asteroid resource acquisition activities will benefit from the knowledge gained from the demonstration of regolith acquisition and recovery to the spacecraft.

For this third series of tests new test chambers have been designed and built that isolate the sampler head from the regolith until the test is conducted and isolates it again after the test run. The sampler heads and short test arms are the same as used in the 2009 tests. There are five test chambers (see below), two each in two of the fixtures and one large test chamber. The large chamber tests the case where regolith on a small body with micro-g gravity levels might push aside from the sampling head. The gas control packages are separate for ease of handling and hooked up after loading onto the A/C. The chambers have filtered vent lines to attach to the A/C vent.