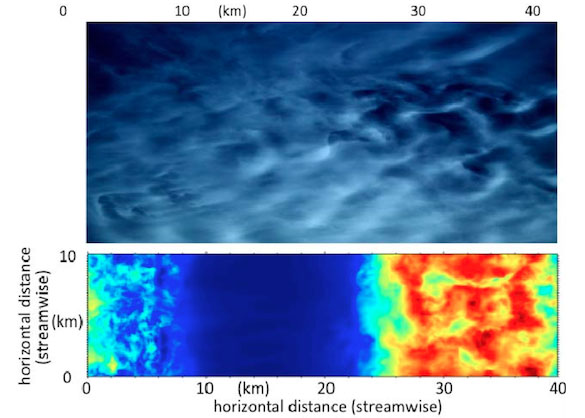 Polar Mesospheric Clouds (PMCs) are the highest clouds in the Earthâs atmosphere, 83 km (50 miles), near the edge of space, and are observed slightly below the mesopause in the polar summertime. These clouds are of special interest as they are sensitive to both global climate change and to solar/terrestrial influences, i.e. the coupling between the heliosphere and the Earth's atmosphere. The first recorded sightings of PMCs were reported in 1885 at high latitudes and were recognizable because they were of such altitude as to still reflect sunlight after the sun had set, thus giving the appearance of glowing at night, hence the term noctilucent (ânight-glowingâ) clouds. The objective of this flight experiment is to observe and analyze, for the first time, stabilized imagery of very high resolution in proximity to PMC cloud layers. Tomography of PMC formations may then be obtained to a precision previously unobtainable.

There has been a strong increase of interest in PMC research in recent years as scientists have realized that these clouds are very sensitive indicators for what is going on in the atmosphere at higher altitudes. Due to the extreme cold temperatures and very low density of the mesosphere, small changes in the atmospheric environment can lead to large changes in the properties of these clouds. So by observing these properties and their variability, we can learn a lot about the atmosphere as a whole. The objective of this flight experiment is to observe and analyze, for the first time, stabilized imagery obtained through a range of scattering angles in proximity to PMC cloud layers.

There are four components to the proposed observatory: 1) the still frame camera, 2) the HD video camera, 3) the DCS and payload specialist interface, and 4) the space-rated enclosure. The proposed experiment will raise the TRL of both cameras, DCS, and payload specialist interface to 6 after testing of the integrated package and then to 7 after the successful suborbital flight.

The proposed observatory has applications that are broad in scope. The experiment will provide a better understanding of the small scale dynamics of PMCs due to the greater sensitivity and the proximity of the imagers compared to those on the NASA Small Explorer AIM satellite. In addition to the study of PMCs, the proposed observatory may be used in a variety of applications, including the imagery of environmental phenomena (e.g. fires, disaster scenes) and upper atmospheric imagery.

PMC imaging and tomography will define small-scale dynamics at spatial scales from ~10 m to ~10 km or more in three dimensions (3D), depending on proximity to the PMC layer, yielding a capability for such measurements unobtainable with any previous in-situ or remote sensing methods. We anticipate our studies to advance our understanding of both the small-scale dynamics (essentially gravity waves, instability dynamics, and turbulence) in the mesosphere and lower thermosphere (MLT) and the influences of these dynamics on the PMC microphysics themselves.

The payload will consist of two still frame cameras and a high-definition video camera mounted within a space-rated enclosure. The enclosure will then be integrated onto an adjustable mount that will have servo motors that can adjust the azimuth and elevation and contain an Inertial Reference Unit (IRU), data transmitters, and a GPS receiver that will record and transmit specific geospatial data of the camera orientations.