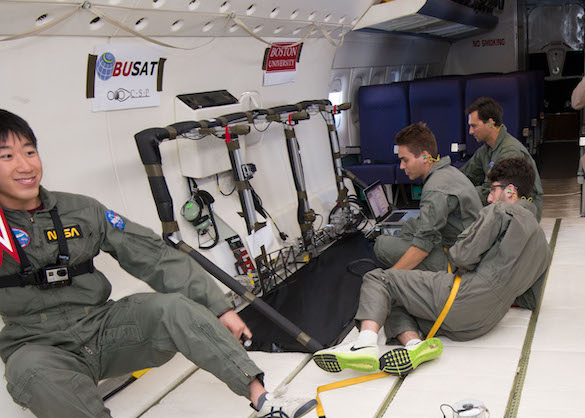 The Boston University student Satellite for Applications and Training (BUSAT) project is a hardware development program developing a scientific nanosatellite platform for future multi-mission use with a minimum of non-recurring engineering cost. The primary goal of the microgravity flight campaign is characterization and demonstration of the mechanical responsiveness of two key hardware components: a solar panel deployment system and an antenna array deployment system. In doing so, BUSAT intends to create standardized, low-cost, and reliable nano- and pico-satellite mechanical bus subsystems for future use by defense, civilian and academic spaceflight projects.

Rather than create unique power and communication systems for each payload or mission, BUSAT sets a common physical layer, software and mechanical protocol design and is assembled in less than two hours (instrument delivery to test and integration phases). The mechanical solar panel and antenna deployment assemblies are also completely modular, allowing maximum flexibility in mounting orientation and location. The solar panel deployment system makes use of a non-pyrotechnic, fracturing bolt device which allows for spring hinges to swing the panels into an open position. As the panels open, antenna boxes positioned underneath them will extend spring-loaded, flexible antenna coils into predetermined orientations and will fix them in this orientation for the duration of the space mission. Due to the nature of these stored energy devices it is highly desirable to analyze their responsiveness in the closest approximation possible to actual condition.

The BUSAT mechanical deployment subsystem is currently at TRL 5-6. Due to the successful repeated deployments in the microgravity environment, the solar panel deployment mechanism (kinematic mounting structure, TINI Frangiboltâ ¢ mounting assembly, custom hinges) have progressed to TRL 6. The antenna assembly progressed to TRL 5, and lessons learned during the microgravity flight campaign are feeding back to a modified design.

The result of the BUSAT program will be an integrated satellite bus that utilizes reliable, low cost, highly adaptive, standardized components. The direct results of this test plan will create the blueprints for an âoff the shelfâ communications and solar panel deployment mechanism that can be integrated into nearly any cube-sat sized satellite project. CubeSats missions are currently in all stages of development throughout the defense, civilian and university space research communities.

The BUSAT microgravity test rig is composed of three major subsystems: a support structure, a hinged aluminum solar panel support substrate, and an antenna deployment module. The structure is designed to replicate the BUSAT mechanical satellite structure and to provide adequate control in the free-flight test configuration. The deployable antenna array is based on very thin spring steel and is a low-tech, low-cost response to the need for long UHF/VHF antennas that fit in the limited physical envelope of small secondary payloads. 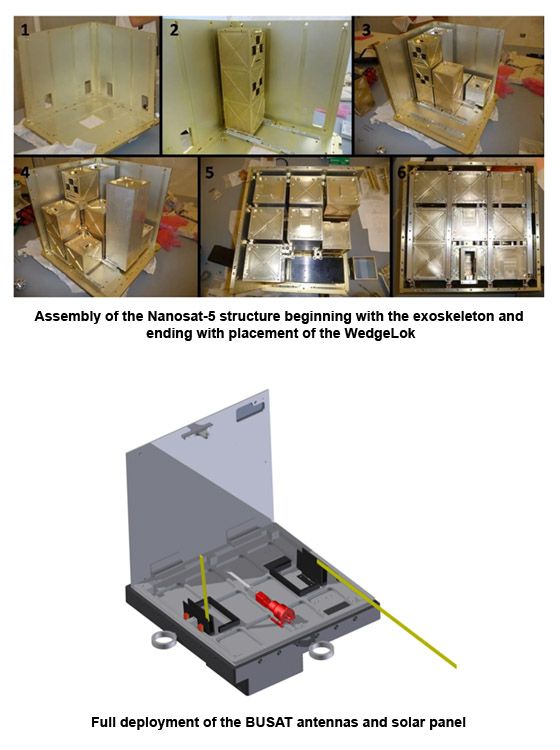