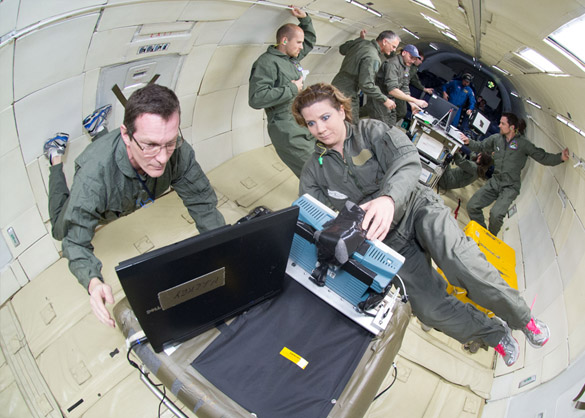 Both hardware and protocol improvements are being investigated for the promising application of Functional Near Infrared Spectroscopy (fNIRS) in flight situations in order to assess whether or not a crew memberâs cognitive awareness has been impaired. fNIRS is an emerging technique which indirectly measures neuronal activity in the cortex via neurovascular coupling: neurovascular activity patterns can indicate cognitive state. It is non-invasive, relatively portable, inexpensive, and safe for long-term monitoring and repeated measurements. fNIRS exploits the principle that optical absorption changes with blood oxygenation levels through the hemodynamic response.

To measure the optical absorption changes along paths through the skin to the brain and back, fNIRS headgear must deliver and collect light at the scalp. Despite the continuing improvement of various research laboratory-based and commercial instrumentation, hardware currently used to couple optical signals to the scalp behind the hairline is bulky, uncomfortable to painful, susceptible to motion artifact and interference from the hair, not expeditiously self-applicable and not readily integrable with existing environments (for example, cockpits and pilot headsets). Reducing such difficulties consistently encountered by those in both industry and academia who uses fNIRS is a design-driven aim. The environment aboard the reduced gravity aircraft provides a platform for testing fNIRS headgear at varying g and vibration levels.

The proposed test program will offer an invaluable opportunity to validate the fNIRS headgear in the face of real-world conditions and will allow the design team to address in the future any issues as they work toward flight-like prototypes. To increase TRL of the fNIRS instrumentation, we plan to test the instrument on a tissue and blood phantom in a realistic flight environment which includes reduced gravity, hyper gravity and at rapidly varying gravity levels.

Benefits to NASA are numerous in the disciplines of space exploration and aviation safety. fNIRS could be used to detect cognitive state for pilot or astronaut crew training or to optimize human performance during operations. The success of these efforts to produce ânext generationâ fNIRS headgear would bring the benefits of the fNIRS technique out of the controlled laboratory and into operational environments, enabling in-task monitoring of crew reaction during safety-critical tasks.

Prototypes of competing fNIRS headgear designs will be installed in a Glenn Research Center (GRC) flight rig containing an optical test bed. The objective of the proposed flight experiment is to test the optical performance of the fNIRS instrumentation as mechanical parameters are varied. Artifacts in the optical data will be investigated depending on the stability of the headgearâs mechanical coupling to phantom material. This is important because the headgear must be comfortably coupled to a personâs head while providing reliable signal across diverse operational environments.

The fNIRS flight experiment consists of the fNIRS headgear, modulated laser light delivery and collection through fiber optical components, and a test phantom simulating the gray matter in the brain. The goal of our experimental method is to test and evaluate fNIRS headgear under nominal flight and various rapidly-changing gravitational and vibrational conditions. To accomplish this goal, fNIRS optical probes will be tested in various optical configurations across these conditions. The pressure between the headgear and the phantom material, and the integrated scattered optical signal received by a photodetector, shall be digitally recorded with a high-speed data acquisition system for ground-based post-flight data analysis. 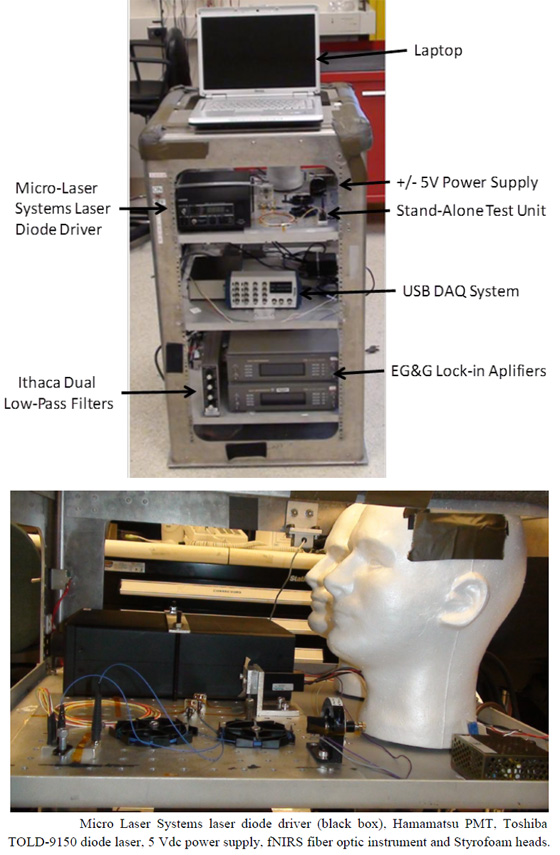