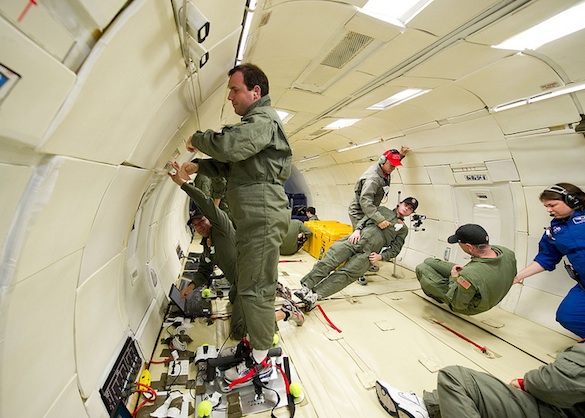 Microgravity-induced changes in cardiovascular physiology are well-known and significant. Even short duration flights can lead to orthostatic intolerance, syncope, and reduced maximal oxygen uptake upon return to earth. In long-duration spaceflights, these effects can lead to the incapacity to egress the re-entry vehicle without help. Countermeasures, such as exercise or low body negative pressure application, are typically used to mitigate these effects. However, there is still a need for a simple method to monitor and quantify the cardiac de-compensation and the effectiveness of the counter-measures, as shown in the NASA Bioastronautics Roadmap.

Our Stanford team has developed a non-invasive hemodynamic monitor based on the measurement of the ballistocardiograph (BCG, see Ballistocardiography) using a weighing scale. This system has been thoroughly tested in multiple clinical trials, and has shown to be effective in monitoring changes in cardiac output, contractility and other cardiovascular parameters. Compared to other BCG monitors based on the recording of the free-floating body acceleration, this system has the advantage to allow recording both on the ground and in microgravity. This way, data measured in weightless environments can be interpreted in light of the large body of data that has been gathered on the ground, significantly facilitating the validation of the method.

We aim to further the development of this technology and demonstrate its usefulness in microgravity in a series of parabolic flights. From a TRL of 4, we expect to bring the system to a TRL of 6 following this campaign. In addition, the joint measurement of the free-floating acceleration BCG will provide key data towards the cross-validation of these two complementary modes of measurements, ie. free-floating and scale based.

The adaptations required for micro-gravity use will benefit commercial embodiment of this system, for instance through the validation of noise-cancellation algorithms. The weighing-scale BCG platform has many commercial applications related to non-invasive hemodynamic monitoring, both in hospital and home monitoring. Our BCG scale system has already been used at Stanford Hospitals and Clinics, the Palo Alto Veterans Affairs Hospital, and in a private cardiology clinic.

We plan on flying two setups, collecting data from six persons on each flight, over five days. The in-flight experiment will consist of two measurement modes, tethered and free-floating: in the first mode, the subjectâs feet will be strapped to the top of the scale, and signals from the scale, geophone sensors, ECG and accelerometers will be recorded by the data logger after amplification; in the second mode, the subject will be free-floating, and only the ECG and acceleration sensors will be wired to the data logger. Measuring both scale BCG and acceleration BCG in free-floating conditions will provide the relationship between these two measurement modes.

The measurement setup primarily consists of (1) a weighing scale affixed to the frame of the aircraft, with an electronic output wired to a small, body-worn data logger; (2) a seismic vibration sensor, also rigidly coupled to the aircraft, and wired through an amplifier to the data logger; and (3) four sensors attached to the human subjectâs body - three electrocardiogram (ECG) electrodes, and one accelerometer. 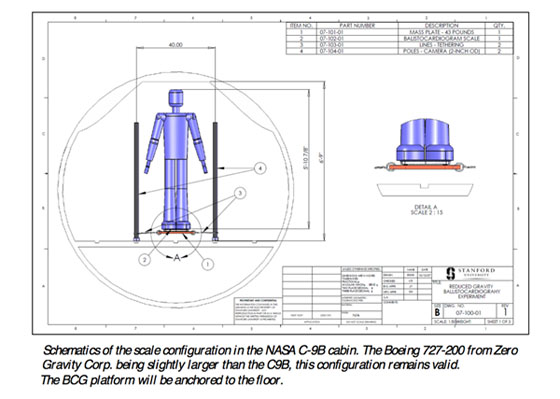